The owners of the dealership are now "desperately seeking" help to recover their losses, the report said. 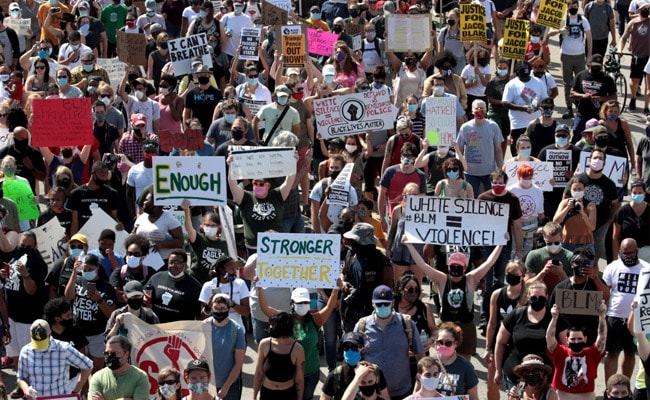 People march in support of Jacob Blake and his family in Kenosha, US. (Representational)

An Indian-origin family, which owned a car dealership in Kenosha, suffered a loss of over USD 2.5 million after their business was destroyed in a fire allegedly set by a mob amid protests over the shooting of a 29-year-old African-American man in the US' Wisconsin city, according to a media report.

Kenosha News reported that Anmol Khindri, a member of the family who owned the dealership "Car Source", estimated the monetary losses from the massive fire amount to be over USD 2.5 million.

The owners of the dealership are now "desperately seeking" help to recover their losses, the report said.

Jacob Blake was shot seven times in his back by a police officer on August 23 and remains in a hospital. The dealership was attacked when a mob descended into its lot and begin smashing cars on the first night of unrest last Sunday. There was an explosion and subsequent fire that spread from one vehicle to the next, one resident told Kenosha News.

Mr Khindri said police notified him of the damage, but he feels little was done to prevent them.

"Everybody watched it burn to ashes," he said. "Nobody did nothing about it- nothing."

Mr Khindri said the business is at a complete loss for what it should do next as insurance is not providing any immediate help.

"I have a family to feed. I have 20 other families who have worked for this business over the last eight or nine years."

Mr Khindri called for more protections for local businesses currently suffering from the impact of circumstances out of their control.

"It's easy for the government to say 'alright, guys, you're on your own. I'm sorry, your insurance doesn't cover it. Oh, I'm sorry for your loss.'' No, that's not an answer. This happened because they let it happen."

A report in Fox News quoted Mr Khindri as saying that the trauma of losing the business is "horrific," adding that the insurance company has failed to provide immediate support and, as of last week, the destruction was labelled as "domestic terrorism."

The Fox News report said that prior to the destruction, Car Source had more than 140 vehicles available for sale, according to its website. Afterward, video showed the charred remains of dozens of cars -- with only a few left unscathed.

The report added that Josie Rodriguez, a resident of a house adjacent to Car Source, recalled seeing a mob descend into the lot and begin smashing cars. The business was allegedly attacked twice and the total loss is estimated at USD 2.5 million.

Charred scraps and shattered glass littered the area, where other downtown buildings had been badly damaged nights before.

Rodriguez said it was a "terrifying time" as she saw an explosion and the fire spreading quickly from one vehicle to the next.

Rodriguez said she then dialed 9-1-1 again, but help did not come. Dispatchers told her it was not safe for firefighters to respond to the scene, she said.

Car Source has organised a GoFundMe camping to raise funds to help it recover some losses. The business aims to raise USD 500,000 in total.

Blake's shooting comes just three months after the death of African-American George Floyd at the hands of a white police officer that had triggered massive protests, looting and rioting across the US, with hundreds of thousands of demonstrators taking to the streets across the country protesting against repeated police brutality and systemic racism.

Blake, who was shot seven times in the back, was stepping away from officers who had their guns drawn. At the time of the shooting, Blake's three young sons, ages 3, 5 and 8 were sitting in a car at the scene.