Dr Dave A Chokshi was named Commissioner of the City's Department of Health and Mental Hygiene on Tuesday. 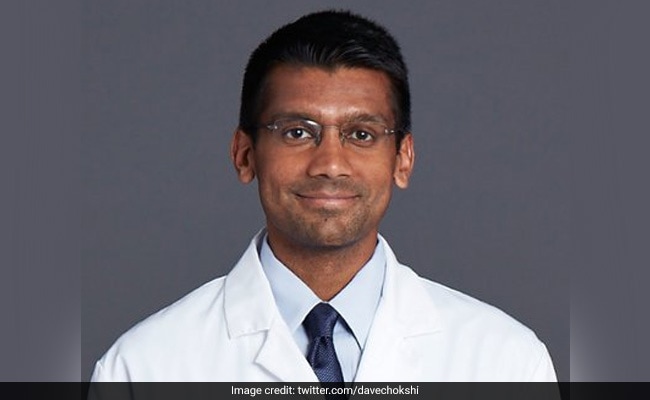 Dr Dave A Chokshi, a 39-year-old Indian-origin physician with expertise in public health, has been appointed as New York City's new health commissioner by Mayor Bill de Blasio who praised him for playing a crucial role in addressing the unprecedented coronavirus challenges faced by the city.

Dr Chokshi was named Commissioner of the City's Department of Health and Mental Hygiene on Tuesday after serving health commissioner Dr Oxiris Barbot resigned from her post.

Dr Blasio said Dr Chokshi has spent his career fighting for those too often left behind.

"Never has that been more true than during the COVID-19 pandemic, where he has helped lead our City's public health system under unprecedented challenges. I know he's ready to lead the charge forward in our fight for a fairer and healthier city for all."

The Mayor said at a news conference that Dr Chokshi has an "extraordinary history" and as a child of immigrants, grew up with tremendous potential, and worked hard every step of the way to realise that potential.

Dr Chokshi recalled that opportunity propelled his grandfathers to move from small villages in Gujarat to Mumbai two generations ago.

His father was the first in his family to immigrate to the United States, settling in Baton Rouge, Louisiana, where he was born and raised.

A Rhodes Scholar, he has served as a White House Fellow in the Obama Administration and was the principal health advisor to the Secretary of Veterans Affairs.

In 2016, President Barack Obama appointed him to the Advisory Group on Prevention, Health Promotion, and Integrative and Public Health.

"I couldn't be prouder of our City's response in the face of a once-in-a-lifetime public health crisis," Dr Chokshi said, adding that he was honoured to serve the people of New York City.

"Together, we will emerge from this pandemic as a stronger, fairer, and healthier city."

New York currently has 446,691 confirmed cases of coronavirus and 32,801 deaths due to the infection, according to worldometres.info.

He said that the COVID-19 pandemic has "unmasked how disease, racism, and economic dislocation intersect with devastating health consequences.

He added that the epidemic is only the most recent example of the vicious cycles of illness and inequity that he has seen over his career.

"Each of those experiences further forged my conviction that we must build toward better health systems with prevention at the center and a more proactive approach to avoidable human suffering."

"We are in a better place with COVID-19 than we were this spring thanks to the efforts of New Yorkers, the administration, the Health Department, and Health + Hospitals....The role of public health is central and clear. Just as with my patients in the clinic, our public health approach must begin with listening to patients."

He said for the city to succeed, "we must use science to diagnose problems and bring together everyone who can stop health threats before they start, whether COVID or otherwise.

For us to succeed, I will need to embody my core values of truth, justice, and kindness every day."

The Mayor's office said in a statement that Chokshi has served at the highest level of local, state, and federal health agencies, including NYC Health + Hospitals, where he was in senior leadership roles over the past six years.

Dr Chokshi comes to the Department of Health and Mental Hygiene with experience in public health, clinical medicine, and health policy.

He has served at the Louisiana Department of Health before and after Hurricane Katrina, with a focus on reshaping the State's healthcare system in the wake of the storm.

As a Rhodes Scholar, he earned an MSc in global public health from the University of Oxford.

Dr Chokshi will continue his clinical practice at Bellevue Hospital, where he has taken care of patients as a primary care physician since 2014.

During his training, Dr Chokshi did clinical work in Guatemala, Peru, Botswana, Ghana, and India.

Dr Chokshi also served on the Federal Emergency Management Agency delegation to New York City after Hurricane Sandy in 2012, coordinating with the Department of Health and Mental Hygiene on a door knocking initiative to bring food and medication to stranded seniors in high rises across hard-hit areas of the city.

Former Surgeon General of the United States Dr Vivek Murthy said for the last 15 years, he has seen Dr Chokshi "touch the lives of patients and communities in profound ways as a physician and public health leader.

"He is of a rare breed of leaders who combine brilliance and strong judgement with humility and compassion. These qualities and his unfailing moral compass will serve New York City well as it faces the COVID19 pandemic and longstanding public health challenges. In Dr Chokshi, New York has found a leader worthy of its trust and support," he said.

A report in The New York Times said Barbot resigned to protest her "deep disappointment" with de Blasio's handling of the pandemic.

"I leave my post today with deep disappointment that during the most critical public health crisis in our lifetime, that the health department's incomparable disease control expertise was not used to the degree it could have been," Barbot said in her resignation email to de Blasio, according to The New York Times.