The third flight organised by the Indian High Commission in Johannesburg, South Africa, since last month as part of the Vande Bharat mission left this morning with 247 passengers. 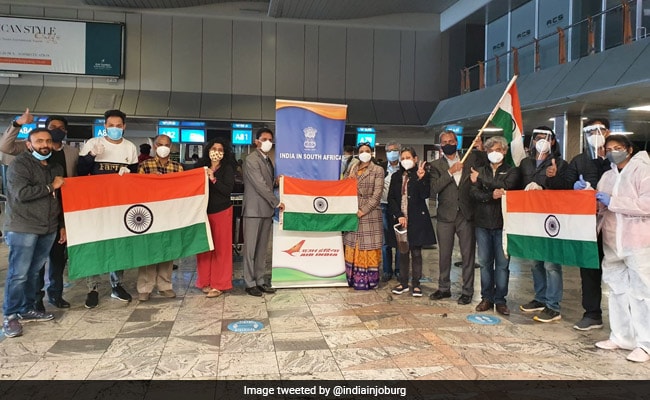 Third time was a charm for Mumbai resident Lopa Mudra as she was among 247 stranded Indian nationals who returned home from South Africa today on one of the two repatriation flights arranged this weekend.

The third flight organised by the Indian High Commission in Johannesburg, South Africa, since last month as part of the Vande Bharat mission left this morning with 247 passengers. Another 203 passengers will leave for home on the second flight on Sunday.

Ms Mudra was in South Africa on an international work project with several colleagues. Her colleagues left on earlier flights before the lockdown in South Africa, but her separate flight got cancelled.

The lockdown began in South Africa on March 26.

Ms Mudra could not board her second flight as part of the Vande Bharat mission because she fell sick.

Ms Mudra, who is a diabetic, had to pay a high ticket price for the third time and there were no refunds on the earlier flights.

She also lost money on an expensive hotel in Mumbai which she had booked twice for her mandatory quarantine period on arrival.

Consul General Anju Ranjan said most of the passengers will transfer to another flight in Mumbai which will continue to Hyderabad, Chennai and Bangalore to repatriate many citizens who have been stranded in South Africa for more than three months due to the COVID-19 lockdown.

On Sunday, a chartered flight organised by the South Africa Telugu Community (SATC), a humanitarian organisation of expatriates, is expected to take just over 200 passengers back to Delhi.

"We organised this flight with the support of the High Commission because our philosophy is to assist all our Indian brothers and sisters at all times," said SATC Chairman Vikram Kumar Petluru.

"There have been a number of flights to south India, on which many of our friends and members managed to return home, so we decided to help those from north India with his flight," Mr Petluru added.

The passengers on both flights had to be cleared first by the Indian High Commission.

"Because bookings for the flight only opened on Monday, some people who wanted to go back could not meet the requirements in time," said Ashish Sharma of Satguru Travels, which has been coordinating all the flights, including the three earlier flights.