Offering a history lesson, Mr Kushwaha claimed the BJP was considered an "untouchable" party before 1995-96 as no political party wanted to associate themselves with them. 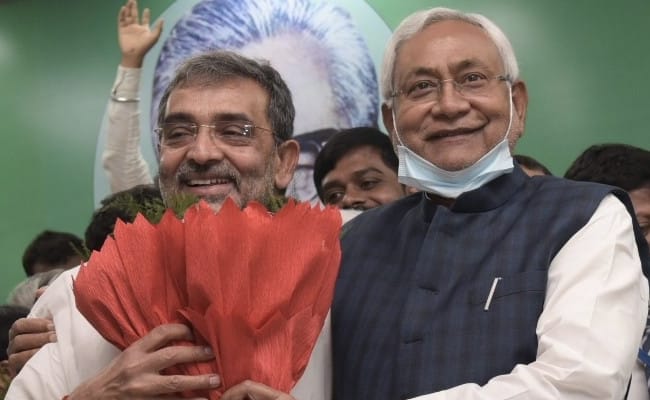 "Had George-Nitish not been benevolent, there would have been no trace of you today," he said. (file)

Upset over Nitish Kumar walking away from their alliance in Bihar, senior BJP leaders like Sushil Modi and Ravi Shankar Prasad have recently implied Mr Kumar should be grateful as the BJP made him a union minister several times and also made him a Chief Minister even though he had lower strength in the state assembly.

Offering a history lesson, Mr Kushwaha claimed the BJP was considered an "untouchable" party before 1995-96 as no political party wanted to associate themselves with them.

Then leaders of the Samata Party George Fernandes and Nitish Kumar came to the BJP's rescue "like angels", he added.

"They attended the Mumbai session of the BJP and then formed the alliance with the Samata Party. BJP became touchable from untouchable then. Had George-Nitish not been benevolent, there would have been no trace of you today," he wrote in a Facebook post in Hindi.

Mr Kushwaha said the limits of ingratitude have been crossed and BJP leaders should recall this history from 1995-96 "if there is any gratitude left in them".

Taking a swipe at the ruling party, the JD(U) leader said that the entire country knows that when BJP is trying to change the history of the country itself, then "what is the big deal if you forget the history of your own party".

Upendra Kushwaha, a former union minister and current MLC in Bihar, had parted ways briefly with Nitish Kumar over some dispute and set up his own party called the Rashtriya Lok Samta Party. After relations with the Bihar Chief Minister got better, Mr Kushwaha merged his party with the JD(U) last year.