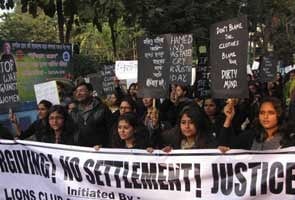 New Delhi: Since the fatal gang-rape of a medical student on a Delhi bus three months ago, the government has professed that improving women's safety is at the top of its agenda.

Yet, a new proposal for tough anti-rape laws has been delayed again, because senior ministers disagree over key features of the bill, like whether the age of consent should be lowered from 18 to 16.  Sexual intercourse for those below the age of consent is considered statutory rape.

The government has said repeatedly that the bill will be introduced quickly in parliament for discussion and clearance. Both houses break for a month on March 22.

The bill is based largely on the recommendations of the Verma Commission, a three-member panel of legal experts which was set up in December amid national outrage over the student's gang-rape. Named for retired chief justice JS Verma, the commission suggested important and over-arching  changes to existing laws for crimes against women.  Two of the commission's three members were in their 80s.  They worked round the clock to deliver their report in just 29 days.

The government has performed poorly in comparison.

In Delhi, four cases of rape were reported every day in January and February, a 100% increase over the same period last year.

At a cabinet meeting this morning, senior ministers were not able to agree on issues like whether the word "rape", which is gender-specific,  should replace  the gender-neutral "sexual assault" in the proposal, and how to define voyeurism and stalking, which the bill identifies as criminal offenses for the first time in India.

The government has also called an all-party meeting next Monday to sort out objections raised by the Samajwadi Party, the Bahujan Samaj Party and the Bharatiya Janata Party on some provisions.

Promoted
Listen to the latest songs, only on JioSaavn.com
The Women and Child Development Ministry has opposed the move to lower the age of consent from 18 to 16, while those in favour of it point out that teenagers are sexually active at a younger age than earlier, and must be protected from being accused of statutory rape.