Women, Ramdev said at an event on Maharsahtra's Thane, can look good in anything saree, salwar kameez or even when they wear nothing 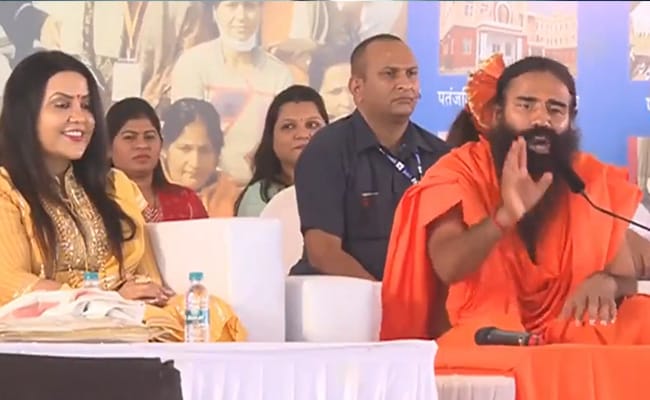 Ramdev's indecent remarks on women's attire have been condemned by leaders

Yoga teacher Ramdev's obscene comments on women have set off a controversy that threatens to turn political. Women, Ramdev said at an event on Maharashtra's Thane, can look good in anything - saree, salwar kameez or "even when they wear nothing".

Ramdev made the comments at an event on Friday. On the dais with him was Amruta Fadnavis, the wife of Maharashtra Deputy Chief Minister Devendra Fadnavis. Chief Minister Eknath Shinde's son Shrikant Shinde also attended the event.

"I see everyone looks very happy. May you have a happy fortune too. Those in front got a chance to wear sarees. Those at the back did not get a chance. They probably packed and brought sarees from home but did not have time to change," Ramdev is heard saying in the video, smiling all the while.

"You (all) look beautiful in saree. You also look good in salwar suits, like Amruta ji. And like me, even if one doesn't wear anything, that also looks good."

Women in the audience were seen looking at each other in consternation.

"You wear clothes for social norms," Ramdev continued, laughing. "Children don't have to wear any. We used to roam naked till the age of eight or 10 years. It is only now that children wear five layers of clothes," he added.

Ms Maliwal said in her tweet, "The remarks made by Swami Ramdev on women in front of the wife of the Deputy Chief Minister of Maharashtra are indecent and condemnable. All women have been hurt by this statement, Baba Ramdev ji should apologise to the country for this statement."

"Now I know why Patanjali baba ran away from Ramlila Maidan in women's clothes. He says he likes sarees, salwars and...Clearly got a strabismus in his brain that makes his views so lop-sided," she tweeted, referring to the incident in 2012, when the yoga teacher was caught trying to dodge the police in a white salwar kameez.

The Shiv Sena faction led by Uddhav Thackeray questioned why Mrs Fadnavis did not protest against Ramdev's comments.

The BJP has not responded to the comments. There is no clarification from Ramdev or his organisation Patanjali either.