Raghvendra Singh, who had claimed that Muslims will have to "wear tilak" if he wins from Domriyaganj, this time threatened to test the DNAs of Hindus who vote for anyone other than him. 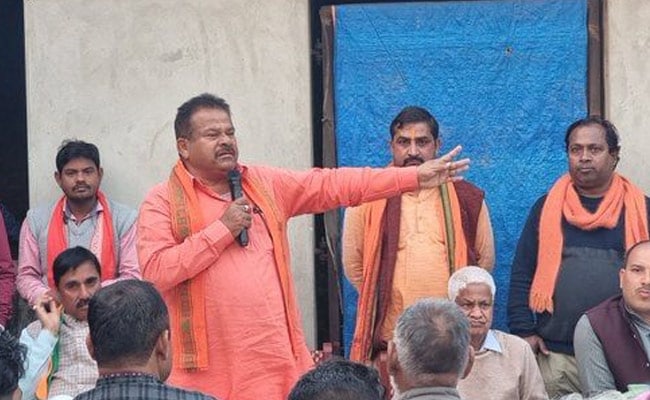 ""Give me their names and I will get their blood tested," said Raghvendra Singh.

Another police case is being filed against BJP MLA Raghvendra Singh for a repeat of hate speech in the viscerally divisive election campaign in Uttar Pradesh. The MLA, who had claimed that Muslims will have to "wear tilak" if he wins from Domriyaganj, this time threatened to test the DNAs of Hindus who vote for anyone other than him.

"If the Hindu is going elsewhere, then the blood of the 'miyan' (derogatory reference to Muslims) is flowing in his veins. He is a traitor and an illegitimate child of Jaichand," the MLA declared, referring to the 12th Century king whose name has become synonymous with "traitor".

"If after so much harassment, a Hindu goes to the other side, he should not be able to show his face. How many of you are Jaichands?" he demanded, heaping invectives upon the audience at a village in his constituency.

The video is reportedly two days old.Domriyaganj has a mixed population and votes in Phase 6, on March 3.

A hate speech case was filed against Raghvendra Singh last week too over his "tilak" remarks.

"If I become MLA again, like gol-topis (skull caps) have vanished, next time the miyan log (term used derogatorily for Muslims) will wear the tilak," Singh had said.

When there was a backlash, he said it was a "conditional speech" to counter what he called "Islamic terrorism".

"When there were Islamic terrorists here, Hindus were forced to wear gol topis (skull caps). I said 'conditional'. I am ready to sacrifice anything for Hindu pride. I meant that if Muslims are trying everything they can to defeat me, I will not stay silent," said the UP in-charge of the Hindu Yuva Vahini, a right wing group founded by Chief Minister Yogi Adityanath.