Why did you write nasty things, Taliban militants reportedly asked Sushmita Banerjee before killing her 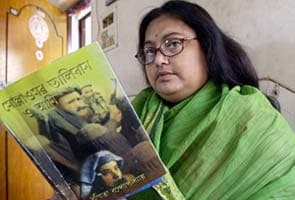 Author Sushmita Banerjee was shot dead by Taliban in Afghanistan.

Kolkata: The militants who barged into the Afghan home of Indian author Sushmita Banerjee and later shot her asked her why she wrote nasty things about them, the victim's in-laws told her Kolkata-based relatives on Saturday.

"I managed to talk to my sisters in-law in Afghanistan over phone today (Saturday) around 2.30 p.m.. I spoke to her husband Jaanbaz Khan and one of his cousins over Jaanbaz's mobile," Gopal Banerjee told IANS.

"Since Thursday, I had been repeatedly trying Jaanbaz's number. But it was unreachable. Today, I finally managed to establish contact with him," said Mr Banerjee, saying his brother-in-law sounded shaken by the experience, and "very upset".

"He seemed very upset at what has befallen him. I could hardly talk to him. But I had detailed conversation with his cousin, who said the killers were Taliban militants," Mr Banerjee said.

"The cousin told me that when the killers barged into the house, they started beating her. They were saying, "Why have you written all these nasty things about us?"

Sushmita Banerjee defied her family to marry Afghan businessman Jaanbaz Khan, with whom she fell in love in Kolkata. She stayed for years with him in Afghanistan, before coming back to India. In 1998, she wrote the bestselling memoir "Kabuliwalar Bangali Bou" (A Kabuliwala's Bengali Wife), offering a vivid description of the suffering of women under the Taliban.

She also described her daring escape from the clutches of militants in the book, which made her a household name in Bengal.

Gopal Banerjee said: "The cousin told me that the militants tied up Sushmita's in-laws when they started protesting. They later abducted her".

Banerjee's bullet-riddled body, with some of the hair ripped off her head, was found Thursday morning.

Promoted
Listen to the latest songs, only on JioSaavn.com
"The body was buried the same day according to their customs," said Gopal Banerjee, adding that Jaanbaz had no plans at present of coming to India.