The Facebook-owned messaging app also said "respect for your privacy is coded into our DNA". 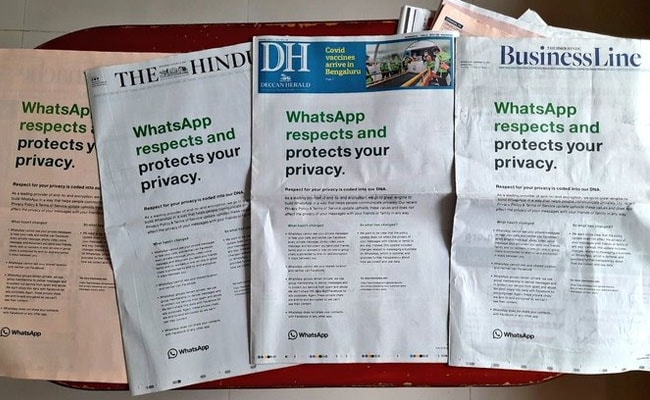 WhatsApp's clarification on its privacy policy was splashed across newspapers in full-page ads this morning as more and more people flocked to rivals Telegram and Signal after changes to its terms. "Respect for your privacy is coded into our DNA," the Facebook-owned messaging app said.
It went on to list what had changed and what hadn't, with the boldfaced title: "WhatsApp respects and protects your privacy".

What has changed is this, according to the ad: "We want to be clear that the policy update does not affect the privacy of your messages with friends or family in any way. Instead, this update incudes changes related to messaging a business on WhatsApp, which is optional, and provides further transparency about how we collect and use data."

"WhatsApp cannot see your private messages or hear your calls and neither can Facebook: every private message, photo, video, voice message and document you send your friends, family and co-workers in one-on-one or group chats is protected by end-to-end encryption. It stays between you," the ad said.

"WhatsApp cannot see your shared location and neither can Facebook."

Addressing "group privacy" worries, WhatsApp said: "WhatsApp groups remain private; we use group membership to deliver messages and to protect our service from spam and abuse. We don't share this data with Facebook for ads purposes. Again, these private chats are end-to-end encrypted so we can't see their content."

Screenshots of the ad blitz were flying this morning on social media, where users commented on the irony of WhatsApp putting out newspaper ads. "Whatsapp a digital platform needs to clarify over its privacy rules through print medium!" - read one post.

Last week, WhatsApp had informed users of an update on how it processes user data and partners with Facebook to offer integration across the social media giant's products. It said users would have to agree to the new terms and policy by February 8 in order to continue using WhatsApp.

This spurred a huge debate, memes and a virtual exodus with many WhatsApp users shifting to rival platforms like Telegram and Signal.

PayTm founder Vijay Shekhar Sharma is among those who commented on the newspaper ads and criticized WhatsApp's "blatant double standards".

#WhatsappPrivacy They are really having a tough time if they have to do this #WhatsApp#WhatsAppPrivacyPolicypic.twitter.com/Aly9W63w1F

But uncle I thought "Indians don't care about #privacy"? pic.twitter.com/UBRWt9TkKY

How long we will be taken for granted by such blatant double standards ?
Self claimed ad claiming respect of our privacy v/s actual policy.

The whole #WhatsApp trust issue is in the corner of this advert.. brand reputation #Facebookpic.twitter.com/dj7drMky4i