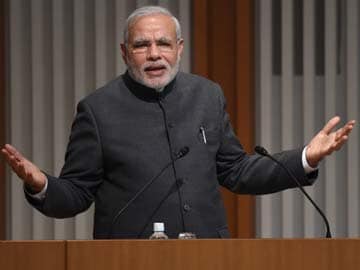 New Delhi\Washington: Prime Minister Narendra Modi, for years barred from visiting the United States, will meet President Barack Obama in two days of White House talks at the end of the month.
The meetings, on September 29 and 30, will take place on Mr Modi's first visit to Washington since he led the Bharatiya Janata Party (BJP) to a crushing victory in May's elections.

It is unusual for a foreign leader, especially one who is not making a state visit, to go to the White House on two separate days. "The fact that there will be interactions over two days is a signal of the importance we place on the US-India relationship," said National Security Council spokeswoman Caitlin Hayden. (Obama Looking Forward to Welcoming PM Modi: Official)

Mr Modi was told in 2005 by the administration of President George W. Bush that he would be refused a visa to visit the United States, after being accused of not intervening to stop communal riots which took place in Gujarat in 2002 after he had taken over as Chief Minister.

He has denied that he did not do enough to stop the riots in which more than 1,000 people were killed, most of them Muslims. A Supreme Court inquiry has said there is no evidence to merit his prosecution.

"The two leaders will discuss a range of issues of mutual interest in order to expand and deepen the US-India strategic partnership," said a White House statement. "They will discuss ways to accelerate economic growth, bolster security cooperation, and collaborate in activities that bring long-term benefits to both countries and the world." (Stronger India is Beneficial For World Peace: US)

Washington has wasted no time in trying to court Mr Modi, who was seen as less keen to engage the United States than his predecessor Dr Manmohan Singh, who had a close relationship with President Obama.

US Secretary of State John Kerry and Secretary of Defense Chuck Hagel have already travelled to India to meet the new prime minister.

Though Washington sees rising India as a democratic counterweight to the region's other emerging power, China, things have not gone completely smoothly.

Mr Kerry rebuked Mr Modi during his visit over India's refusal to ratify an important WTO trade deal on streamlining customs procedures and boosting global commerce. India argued that the pact's market opening requirements could prejudice its efforts to lift up its poorest citizens. (PM Modi's Image of India Undermined by WTO Stand, Says US)

The United States has tried to restore the warmth in relations with India, after a series of spats, including a crisis in December when US authorities arrested an Indian diplomat in New York for allegedly mistreating her housekeeper, infuriating New Delhi. (Obama's Phone Call Ended Frosty Ties With PM Modi, Says US Envoy )
Comments
Prime Minister Narendra ModiNarendra ModiPM ModiBarack Obama