Congress Chapter Over? What Shatrughan Sinha Said On Trinamool Nomination

Shatrughan Sinha also answered questions about whether he felt the Congress could no longer play the role of an effective opposition. 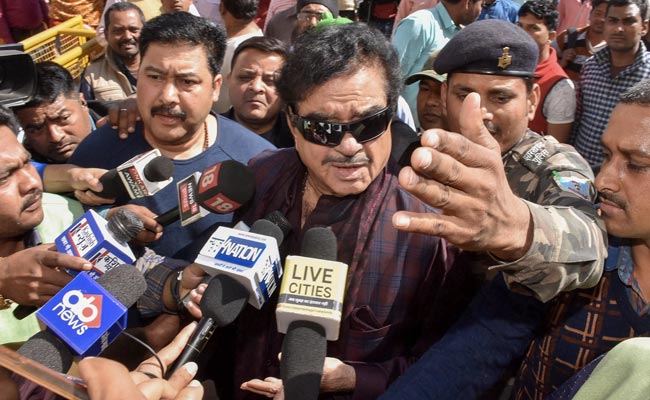 Shatrughan Sinha had joined the Congress after quitting the BJP.

With only the slightest of allusions to his disenchantment with the Congress, actor-politician Shatrughan Sinha on Monday revealed that he had joined the Trinamool Congress at the invitation of West Bengal Chief Minister Mamata Banerjee, a day after being named the party's candidate for the Lok Sabha by-elections from Asansol.

"I have joined the Trinamool Congress on the invitation of Chief Minister Mamata Banerjee, the most talked-about, popular leader of the masses in the true sense. I hope to strengthen the voice of the opposition using the pool of talent that the Trinamool Congress has," the 76-year-old told NDTV in an interview.

"My goal will be to see how I can serve Asansol and West Bengal and live up to the expectations. I may have come in a new direction, but it's the right direction," Mr Sinha said.

Asked about whether he felt the Congress could no longer play the role of an effective opposition, Mr Sinha said, "People who are not able to play the role of a strong opposition will have to do it tomorrow if not today. They saw what happened in these elections and earlier ones. While Mamata Banerjee managed to show the way, beating the 'dhan shakti' (money power) of the ruling party (BJP) with 'jan shakti' (people power)."

"She has definitely become the face of an alternative. People are looking at her with hope. The Trinamool is on the cusp of becoming a national opposition force," the four-time parliamentarian said.

After quitting the BJP, Mr Sinha, who had served as minister in the Atal Bihari Vajpayee-led National Democratic Alliance (NDA) government, joined the Congress and unsuccessfully fought from his hometown Patna Sahib Lok Sabha constituency in 2019. He was defeated by former Union minister Ravi Shankar Prasad in the last parliamentary election and since then has maintained a low profile.

On fighting the by-election from Asansol, triggered by the resignation of former MP Babul Supriyo, and being taunted by opponents as an "outsider", Mr Sinha said, "Whatever people like me have achieved, has been because of people from all over the country. That is what made me an all-India figure. "

"How can anybody call me an 'outsider'? Like my 'janmabhoomi' (birthplace) Bihar, Bengal has always been my weakness. I have done a large number of movies including the national award-winning film 'Antor Koli Jatra' in Bangla language," he said in another interview with news agency PTI.

"Moreover, Asansol has a cosmopolitan population where besides my dear Bengali people, citizens from Bihar, Jharkhand and elsewhere are residing there in great numbers. If I am called an 'outsider' in Asansol, will you say the same for the Prime Minister contesting election from Varanasi?" he said.