Campaigning ahead of the civic elections in the city, Arvind Kejriwal shared why he has not sported his iconic muffler look as yet. 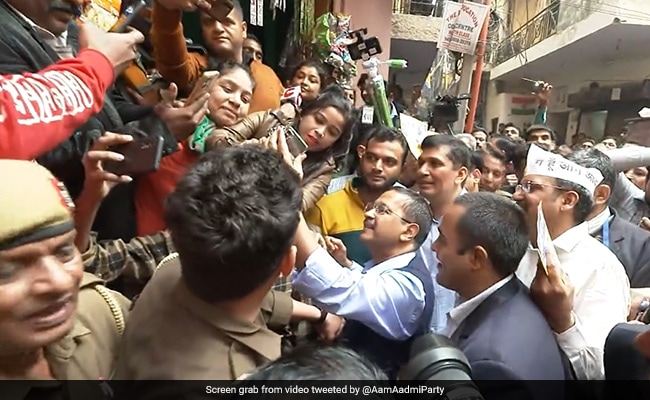 Arvind Kejriwal clicked a selfie with his supporters and those present there.

Chief Minister Arvind Kejriwal's missing muffler today raised a query during his election campaign as Delhi witnesses low temperatures with the onset of winter. Campaigning ahead of December 4 civic elections in the city, Mr Kejriwal shared why he has not sported his iconic look as yet.

"Sir apne muffler nahi pehna (why aren't you wearing a muffler)?" a woman is heard asking the AAP leader in a video tweeted by his Aam Aadmi Party (AAP). "Abhi thand nahi ayi (it's not cold yet)," responds Mr Kejriwal, laughingly.

He also clicked a selfie with his supporters and those present there.

The AAP leader is known for his signature muffler look. He is often seen wearing a muffler during winters to protect himself from the cold.

In his initial years in politics, he had even mockingly claimed that if the CBI searched his house, it would find nothing, but only unaccounted mufflers.

But this is not the first time Mr Kejriwal has been asked about his missing muffler.

When a Twitter user asked him about his missing muffler in 2019, he had said the muffler came out long ago, but the people did not notice.