Watch: PM Modi Shares Video Of His Bond With Peacocks At His Residence

According toofficials, PM Modi has placed Chabootras (elevated structures found in rural India) where birds can make their nests, at his residence. 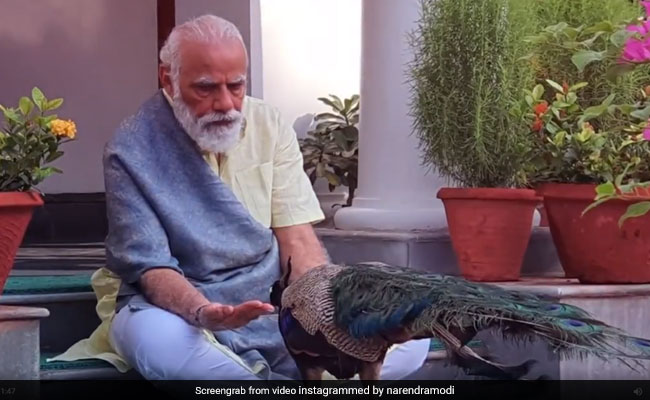 Peacocks are seen as a regular companion of the PM Modi at his residence.

Prime Minister Narendra Modi today treated his social media followers by sharing a beautiful video of his bond with peacocks at his official residence.

The 1.47-minute video -- uploaded on Twitter, Instagram and Facebook -- has a few glimpses of the Prime Minister spending time with peacocks at his Lok Kalyan Marg residence. The video was shared with a poem in Hindi.

According to officials, PM Modi has placed Chabootras (elevated structures found in rural India) where birds can make their nests, at his residence.

Last year, he appeared on the show "Man vs Wild" where he highlighted India's ethos of living in harmony with nature. The Discovery Channel programme saw PM Modi, 68, walking through the wild and taking a ride on a makeshift boat at the National Park in Uttarakhand.

As Chief Minister of Gujarat, PM Modi ensured the state was among the first in India and the world to have a climate change department.