On Video, Man Misbehaves With Khushbu At Rally. She Responds With A Slap

Many came forward to praise the actor-turned-Congress leader for "not putting up with any misbehaviour". 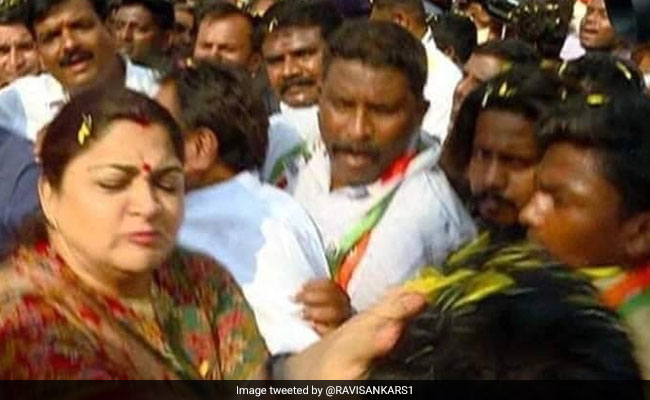 Khushu Sundar was widely praised for the act, which many felt was courageous.

Misogyny can strike any time, and on the stray occasion, get struck back harder.

A video showing actor-turned-Congress leader Khushbu Sundar slapping a man who allegedly misbehaved with her during an election rally has generated a lot of attention on social media. The incident occurred while Ms Sundar was campaigning for her party's Bengaluru Central candidate, Rizwan Arshad, in the Karnataka capital recently.

The short clip shows the former actor -- known for her roles in films likes Annamalai (1992) and Janoo (1985) -- jostling through a crowd at the rally. But suddenly, she turns and slaps a man who is then taken away by a policeman.

As the clip went viral, Ms Sundar did not offer any comment of her own but retweeted media reports and some remarks made by her followers. Many came forward to praise her for "not putting up with any misbehaviour".

"That's a job well done. Nobody has the right to abuse, and if he does, then he should be punished," commented one of her followers. Another dubbed her as a "bold lady forever", and said that she was a "big inspiration for every girl in this critical world".

Ms Sundar, who makes it a point to back women's causes, was among the political figures who supported journalist Priya Ramani in her #MeToo allegations against former Union Minister MJ Akbar. "Finally @mjakbar resigns... one can be an allegation but not all... kudos to the bravehearts who have stood up for the right, silencing the wrong. @priyaramani and all the other women who have stood their ground... this is your victory... Now shouldn't #MJAkbar give up his #RS seat too?" she had tweeted soon after Mr Akbar quit his cabinet post.

The former actor had joined the Congress in 2014, claiming that it was the only party that "can bring about unity among various castes and creeds".