The inauguration began with the bhajan, "Raghupati Raghav Raja Ram," a favorite of Mahatma Gandhi. PM Modi inaugurated the show at Dandi Kutir in Gujarat.

Prime Minister Narendra Modi, who is in Gujarat for the Vibrant Gujarat summit, today inaugurated a 3D projection show at Dandi Kutir in Gujarat based on the life of Mahatma Gandhi and how he inspired political leaders across the world.

The inauguration began with the bhajan, "Raghupati Raghav Raja Ram," a favorite of Mahatma Gandhi.

The life story of Mohandas Karamchand Gandhi - born on October 2, 1989 in Gujarat's Porbandar - began with one of the incidents in his early childhood when he saw a scorpion close to his mother.

Scared that the scorpion might bite his mother, he urged her to kill it. But his mother calmly explained that "no harm should be done to any living being out of fear". 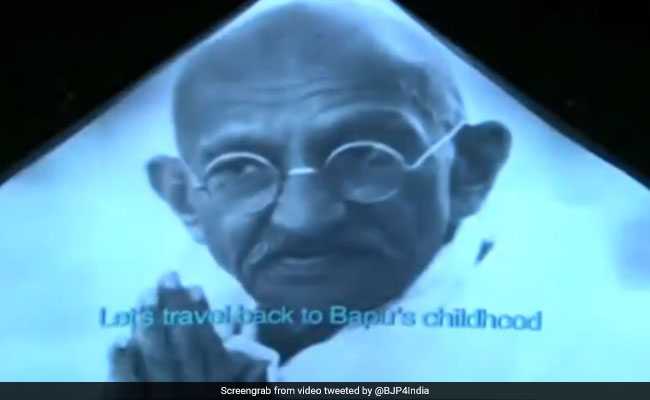 "Let and let live," was the lesson he learnt as a child from the incident.

Gandhi also set an example of non-violence when he fought against racism in South Africa. During the freedom struggle too, he stuck to his principles in fight against injustice. From Gandhi's stand against untouchability to Dandi March, the show was a narration of iconic chapters from Gandhi's life.

"Be the change you want to see in the world," was one of the many Mahatma Gandhi quotes that were a part of the presentation.

The 3D laser show also drew parallels between ideologies of Mahatama Gandhi and PM Modi and the focus of both the leaders on creating a clean and healthy society. The show also had references to PM Modi's ambitious "Swacch India" campaign.

Towards the end of the show were a series of quotes by the political leaders who have been inspired by Mahtama Gandhi including Nelson Mandela, Barack Obama, and PM Modi himself.