Republic Day: Visible if one looked towards Rashtrapati Bhavan from the yearly parade venue, four MiG-17 choppers were seen flying overhead in a wineglass formation as the country gears up to celebrate Republic Day. 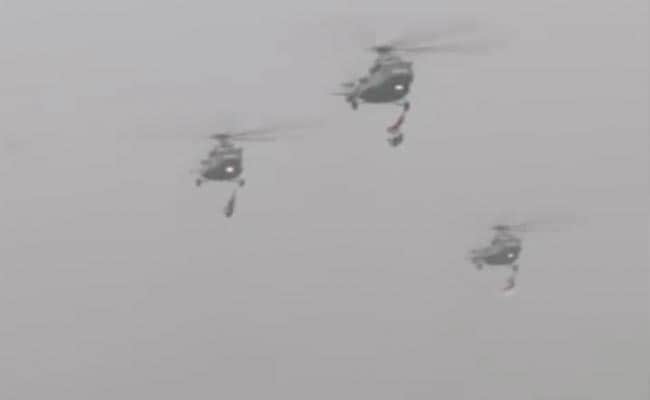 Republic Day 2022: MiG-17 choppers were seen flying in a wineglass formation above Rajpath.

In a full-dress rehearsal for India's annual Republic Day parade, a fleet of helicopters was seen flying above Delhi's Rajpath today, as audiences gathered at the yearly parade venue to witness the lead-up to the country's final celebrations.

Visible if one looked towards Rashtrapati Bhavan from the Rajpath venue, four MiG-17 choppers soared high above the crowds in a wineglass formation, carrying the national insignia and service insignia.

The Indian Army, Navy and Air Force, clad in full uniform and accompanied by their respective bands, also rehearsed their traditional march past for the 73rd Republic Day parade. The Navy, in particular, went viral on social media for an unconventional Bollywood-themed warm-up exercise during their practice run.

The rehearsal took the route that the parade will take on January 26 -- from Vijay Chowk to India Gate via Rajpath, finally ending at Red Fort.

In a first, India will begin its Republic Day celebrations from January 23 instead of January 24 this year, to include the birth anniversary of late freedom fighter Netaji Subhas Chandra Bose.

The celebrations will be inaugurated by Prime Minister Narendra Modi, who will unveil the hologram statue of the freedom fighter at India Gate at around 6 pm today.

Republic Day is celebrated annually on January 26 every year. As per sources, the Republic Day celebrations will end on January 30, the day Mahatma Gandhi was assassinated.