The memorial will honour the valour and sacrifice of thousands of Indian soldiers, sailors and airmen who fought in World War I. 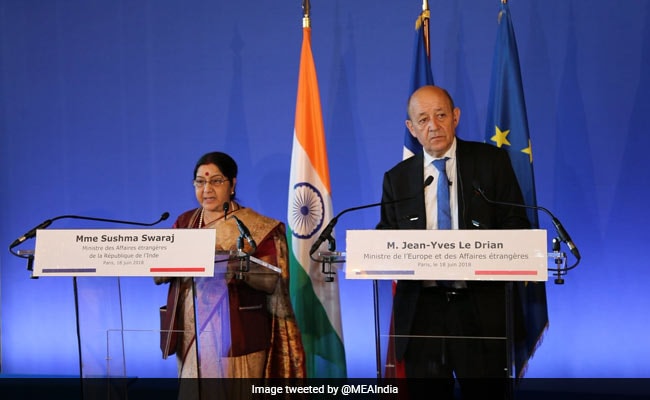 Sushma Swaraj is currently on a four nation tour, and will go to Luxembourg after France.

Paris: India will construct a war memorial at Villers-Guislain, a town around 200 km from Paris, to honour the valour and sacrifice of thousands of its soldiers, sailors and airmen who fought in World War I. The announcement was made by External Affairs Minister Sushma Swaraj in Paris. This will be the second such memorial in Europe.

During the World War I, Villers-Guislain had witnessed a fierce battle in which the British Indian cavalry regiments were heavily involved. The town was held by the Germans but was finally liberated by allied forces in 1918.

Ms Swaraj, who arrived in Paris from Rome yesterday on the second leg of her four-nation tour, addressed the Indian diaspora at a reception organised in her honour. She said that Indians in every part of the world carry India and its civilisational ethos in their heart.

She also handed over certificates of appreciation to Indian community organisation and individuals who have contributed to the Swacch Bharat Kosh.

The minister also attended a ceremony held to name the Indian Culture Centre in the memory of Swami Vivekanand.

Ms Swaraj also visited the India House, Maison de l'Inde, which is a hostel for Indian students in the University City of Paris.

She addressed the Indian students and unveiled a plaque at the India Hostel to commemorate the golden jubilee of the landmark building.

"Bridging the gap between India and France through people-to-people connect! EAM @SushmaSwaraj with the Indian students staying at Maison de l'Inde or Indian hostel on the occasion of its 50th anniversary," Ministry of External Affairs Spokesman Raveesh Kumar tweeted.

Promoted
Listen to the latest songs, only on JioSaavn.com
Ms Swaraj also released a publication titled, 'States of India' which is meant for increasing awareness of the business climate in various states of India and would prove to be a handy guide for French investors.

Later, the minister left for Luxembourg for a two-day visit. She is the first external affairs minister from India to visit Luxembourg.
Comments
FranceSushma SwarajWar Memorial