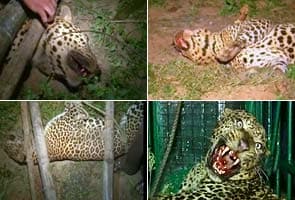 Channapatna: A leopard in distress, trapped in barbed wire, surrounded by a noisy crowd of human beings. A horribly familiar scenario - and things don't look good for the wild cat.

But the villagers here chose to be different. There was excitement, there was fear - but there was also the voice of reason.

The leopard, which could not move much anyway, was pinned down with wooden sticks - and its legs were then tied. Once it was safely trussed up, it was a question of waiting for forest officials to arrive.

"Lots of people came, tied its legs -the aim was that it should not die," said Rangaswamy, a villager.

The forest department van came - and the angry predator was taken away safely.

After treatment it was once again released into the wild where it belongs. And the villagers involved can take pride in their non-violent approach to the entire situation.

Just recently, a mother leopard and her two cubs were found poisoned to death in the same district -after they revisited a buffalo kill. But for this leopard at least, the story had a positive ending.