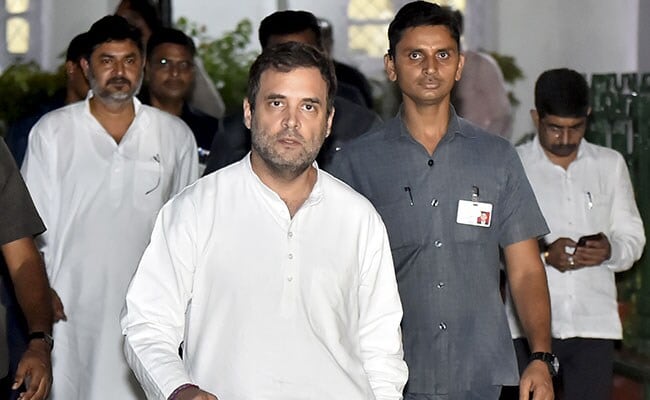 Congress's Rahul Gandhi today tweeted his support for DK Shivakumar, the party's senior leader in Karnataka who was arrested last evening in connection with a money laundering case. The Enforcement Directorate, which made the arrest, has accused him of not cooperating with the investigation -- a charge under which former Union Minister P Chidambaram was also arrested by the Central Bureau of Investigation a fortnight ago.

"The arrest of DK Shivakumar is another example of the vendetta politics unleashed by the Govt, using agencies like the ED/CBI & a pliant media to selectively target individuals," Mr Gandhi's tweet, issued a  day after the arrest, read.

The Congress has called Mr Shivakumar's arrest "vendetta politics" by the centre. In a tweet, the party has also argued that it was an attempt "to distract the public from their failed policies & the sorry state of the economy".

After the arrest of Mr Chidambaram last month, the Congress and other opposition parties had accused the government of seeking revenge.

"The case has been lodged nine years later... he has been arrested 11 years later. This is being done by the CBI, which is being used as government's personal revenge-seeking department," Congress spokesperson Randeep Surjewala said at a press conference. "India witnessed broad daylight murder of democracy as also the rule of law in the last two days," he added.

"Gestapo at work! What else can the Enforcement Directorate do other than harass Congress leaders!" his tweet read.

The legal team of Mr Chidambaram and Mr Shivakumar have argued that not coming up with an immediate confession does not equate non-cooperation.