Monsoon 2020 news: Uttarakhand saw heavy rain and thunderstorms on Monday. There have been reports of power cuts after trees fell on electrical wires at several locations in the hill state. 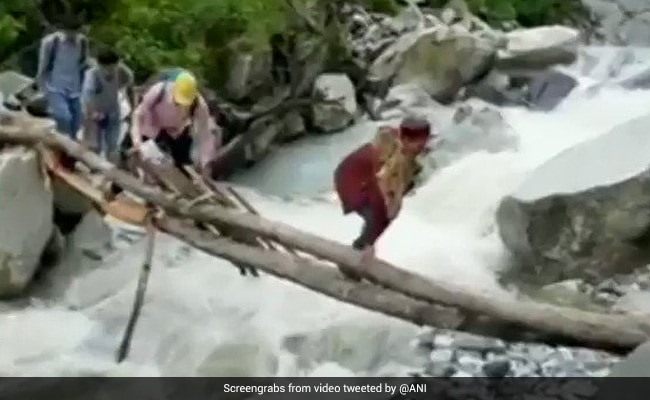 Monsoon images: In Uttarakhand, locals cross a makeshift bridge over a swift-flowing stream

Monsoon 2020 news: Several houses were washed away and roads damaged due to cloudburst at Rudraprayag in Uttarakhand. The state saw heavy rain and thunderstorms on Monday. There have been reports of power cuts after trees fell on electrical wires at several locations in the hill state.

Following heavy rainfall in Dehradun and surrounding areas since morning, the road from Rajpur to Mussoorie was blocked after trees were uprooted. Small landslips and debris falling from the mountain slopes added to the trouble and normal life was hit. Traffic movement also slowed down in the region.

Flooding was reported in many places after heavy rain. Floodwaters entered Dehradun's Tapkeshwar Temple and the water level of Tamsa river, flowing along with the temple, has also increased, authorities said.

People in Sankari made a makeshift bridge with logs to cross a river stream in Uttarkashi.

Huge boulders, loosened by continuous rain, rolled down the slopes and blocked the Kailash-Mansarovar route at Dharchula. In Pithoragarh too, roads were blocked at two locations due to incessant rainfall and landslides.

Uttarakhand: Kailash-Mansarovar Yatra route in Dharchula of Pithoragarh district blocked at two locations due to incessant rainfall and landslides. Traffic movement halted, operation to clear the route is underway. pic.twitter.com/uNdavC7uMu

The weather office has forecast more rain in Uttarakhand for the next 24 hours. Heavy rainfall, with intense spells, are expected at isolated places in Nainital, Champawat, Pithoragarh, Bageshwar, Dehradun and Pauri. An 'Orange' alert for extremely heavy rain has been issued in the state for August 9-10, by the India Meteorological Department.