Uttarakhand: among the Air Force heroes are two couples 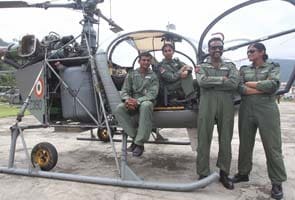 Gauchar: Among the Air Force heroes who are ferrying hundreds of people to safety in Uttarakhand every day, are two couples.

The husbands are operating the large Mi-17 choppers, and the wives pilot 'Cheetahs'.

Squadron Leaders SK Pradhan and Khushboo Gupta have been married for four years. They begin their day at the helipad in Gauchar, the town that has become the hub of rescue and relief operations.

"We have the most important vow to keep with the Indian Air Force. We never thought we would be together on this mission," Squadron Leader Pradhan told news agency Press Trust of India as his wife readied for a sortie to Rudraprayag.

Flight Lieutenant Tanya Srinivas has been married for a year to Squadron Leader Vikram Thiagaraman.

"Oh that is so nice when I found I was also coming for the operation. But we have been trained to keep work and personal life apart," she said.

Squadron Leader Pradhan said he is "comfortable and confident" even when his wife flies through the notoriously treacherous terrain of Uttarakhand.

Squadron Leader Thiagaraman said he just wishes his better half good luck as he knows she is a top notch pilot.

Promoted
Listen to the latest songs, only on JioSaavn.com
Both the couples, who are friends, said they often swap notes and tips about the rescue mission they are a part of.