Use MGNREGA Funds For Water Conservation: PM Modi To Panchayats 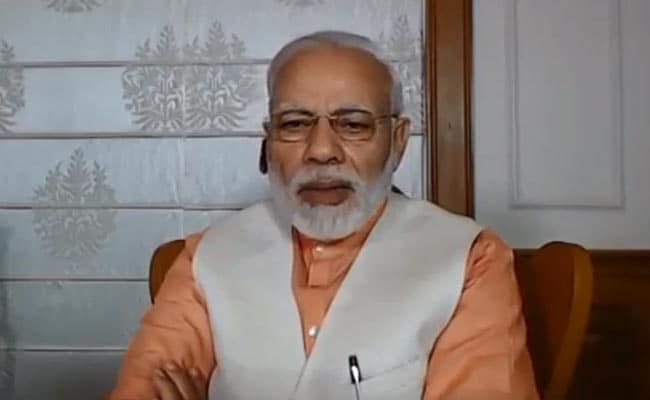 He also said human power available in rural areas could be harnessed to realise Mahatma Gandhi's dream of a village-centric model of development.

PM Modi urged panchayat representatives to spend funds provided under the rural job scheme, the Mahatma Gandhi National Rural Employment Guarantee Act, only on work related to water conservation during the months of April, May and June.

"We should work for conserving rainwater. Panchayats should spend NREGA (MGNREGA) funds on water conservation during April, May and June," he said.

The Prime Minister was addressing a well-attended gathering of tribals and representatives of gram panchayats organised on the occasion of National Panchayat Raj Day at Ramnagar in this tribal-dominated district of Madhya Pradesh.

"Every drop of rain should be conserved. This would not only save our money but also save villages from a water shortage. This would also help in agriculture," he said.

"In 2022, when the country will celebrate the 75th anniversary of its independence, we should strive to make villages as dreamt by Mahatma Gandhi," he said.

"It can be done by using manpower for developing villages, Van Dhan by collecting neem seeds for coating of urea and Gou Dhan by using cow dung for producing electricity, bio-gas and manure for becoming self-reliant," the prime minister added.

Expressing concern over the excessive use of urea which adversely affected the fertility of soil, Modi urged the people to reduce its use.

The prime minister also laid the foundation stone for a liquefied petroleum gas (LPG) bottling plant at Maneri in the district.

The Rs 120-crore plant will supply LPG cylinders to Mandla's neighbouring districts such as Balaghat, Singrauli, Rewa, Shahdol and Jabalpur.

He called upon public representatives to ensure that people in their respective panchayats were fully covered under the Jan Dhan yojana and the prime minister's life insurance scheme.

At the event, PM Modi handed over a cheque of Rs 2 lakh under the insurance scheme to a woman who had lost her husband.

He said public representatives should serve the people with dedication.

"There is no shortage of funds now in the country. But there is a problem of priorities and transparent implementation of developmental schemes. Public representatives can play a major role in it," he stressed.

Earlier, PM Modi launched the Rashtriya Gram Swaraj Abhiyan, which seeks to strengthen the Panchayati Raj system and address the critical gaps that hinder its success.

The programme seeks to address problems that confront pnchayats by enhancing their capacities and effectiveness, and to promote the devolution of powers and responsibilities.

The prime minister also honoured panchayats for their achievements in implementing the government's e-governance scheme, making villages under their jurisdiction open defecation-free (ODF) and also smokeless by switching from conventional fuel to LPG.
Comments
PM ModiMNREGA