Nikki Haley, who is on a two-day visit to India, met Mr Satyarthi at the 'Mukti Ashram', a short-term rehabilitation home for rescued children in New Delhi to discuss children's rights, human rights and security matters, according to a statement by Kailash Satyarthi's office. 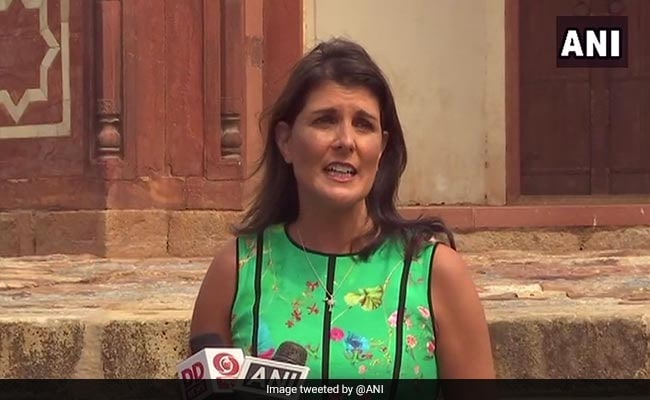 US envoy to the United Nations Nikki Haley today met Nobel Peace Laureate Kailash Satyarthi and reiterated America's commitment to ending child trafficking. The two talked about the challenges in ensuring children safety and rights, prevention of crime against children and also on the prospect of an international monitoring agency under UN.

Ms Haley, who is on a two-day visit to India, met Mr Satyarthi at the 'Mukti Ashram', a short-term rehabilitation home for rescued children in New Delhi to discuss children's rights, human rights and security matters, according to a statement by Mr Satyarthi's office.

Dubbing crimes against children as the "biggest crisis facing humanity currently", Mr Satyarthi urged the highest ranking Indian-American in the Trump administration that an international response mechanism be formed under the aegis of the United Nations to address the issue.

"It is our collective responsibility to ensure that every child is safe and afforded every opportunity to have a full life. I look forward to sharing our commitment to end child trafficking," said Ms Haley.

The two also discussed international problems pertaining to children's safety and rights. Ms Haley also interacted at length with the children who had been rescued from various factories by Mr Satyarthi's team at his NGO Bachpan Bachao Andolan," according to the statement.

"India and the US are two of the largest democracies in the world and should take collective responsibility for the protection of children," Mr Satyarthi said.

Ms Haley is on her first visit to India since becoming the US envoy to UN. She had earlier visited India in late 2014, when she was the South Carolina Governor. Ms Haley is the daughter of Sikh immigrants from Punjab and is the first Indian-American to serve in a Cabinet-level position in any US presidential administration.

Promoted
Listen to the latest songs, only on JioSaavn.com
Comments
Child traffickingNikki Haley