The offer by the US aerospace firm comes ahead of President Donald Trump's first visit to India on February 24-25. 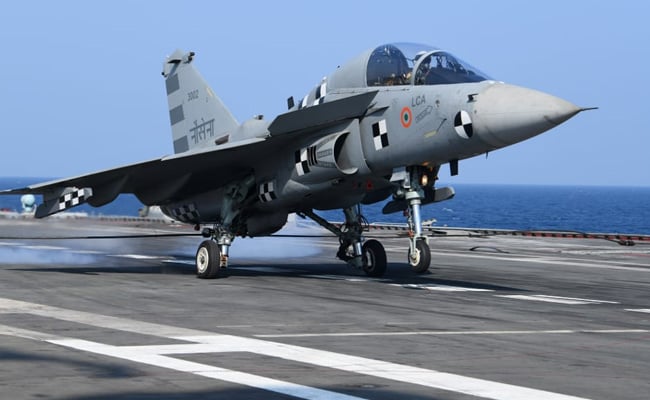 "We are very open to any requirement from the Indian Air Force for any help for Tejas," Lockheed said.

US aerospace giant Lockheed Martin has offered to help India in its multi-billion dollar programme to develop a next generation advanced multi-role combat aircraft and boost capability of the Tejas fighter jet.

The offer by the US aerospace firm comes ahead of President Donald Trump's first visit to India on February 24-25 during which both strategic partners are expected to further expand defence and military cooperation.

Vivek Lall, vice president of Strategy and Business Development for Lockheed Martin, said the company is "very open" to assisting India in further development of the Tejas combat jet as well as the ambitious next generation aircraft.

"We are very open to any requirement from the government of India or the Indian Air Force for any help for the Tejas as well as the AMCA (advanced multi-role combat aircraft) project," Mr Lall told news agency PTI in an interview.

The indigenously developed Tejas has been a showpiece project of India being implemented by the Hindustan Aeronautics Ltd (HAL) and the Aeronautical Development Agency (ADA). Both HAL and ADA are now focusing on an upgraded version of Tejas to make it a world class plane.

"Once you get a platform like the F21, that is just start of a very long-term relationship for future configurations that India desires, future platforms that India wants to develop," he said.

Eyeing the IAF's $8 billion deal, Lockheed Martin has exclusively offered its newly rolled out F-21 fighter to India and even promised to set up a manufacturing facility in India if the company gets the contract.

The company said it will not sell the jet to any other country if it wins the contract for the 114 jets.

Hard-selling F-21 as the best platform for the IAF, he said the aircraft, a derivative of the F-16, will have 40 per cent more weapons package then its competitors.

Asked about weapons package, he said the aircraft had 138 configurations. The company may look at integrating weapons as per India's requirement subject to approval of the US government, he added.