Opposition MLAs accused the Punjab government of harassing pilgrims making use of the visa-free Kartarpur Corridor to visit the Sikh shrine, just across the border from Gurdaspur district. 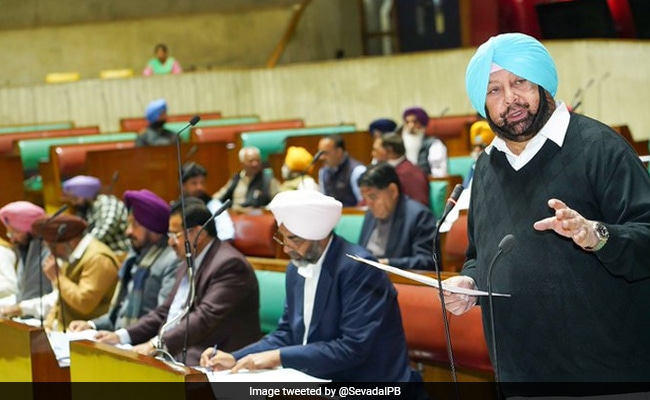 Opposition MLAs created an uproar in the Punjab Assembly on Thursday, storming the well of the House and walking out over the questioning by police of some pilgrims returning from the Kartarpur Sahib gurdwara in Pakistan.

Punjab Jails Minister Sukhjinder Singh Randhawa told the assembly that some pilgrims were questioned following information from the Intelligence Bureau unit in Amritsar.

Opposition MLAs accused the government of harassing pilgrims making use of the visa-free Kartarpur Corridor to visit the Sikh shrine, just across the border from Gurdaspur district.

The uproar in the House comes days after Punjab Director General of Police Dinkar Gupta triggered a row, suggesting in the media that Pakistani agencies could make overtures to Indian pilgrims to Kartarpur Sahib.

"Devotees are being questioned in police stations by Punjab police," he said, citing a media report, and sought a reply from the Congress-led government.

Aam Aadmi Party legislator Kultar Singh Sandhwan described the questioning of pilgrims as "shameful" and sought the immediate dismissal of Director General of Police (DGP) Dinkar Gupta over this.

Mr Randhawa quoted from a letter written on February 17 by an Intelligence Bureau official to the Gurdaspur Senior Superintendent Of Police (SSP), seeking the questioning of some pilgrims.

He said the state government will take strict action against the SSP and the Station House Officer (SHO) if they are found at fault. Shiromani Akali Dal (SAD) members stormed the Well of the House and then staged a walk out.

Later Aam Aadmi Party (AAP) and Lok Insaaf Party MLAs also walked into the Well of the House, and staged their separate walkouts.

AAP MLA and Leader of Opposition Harpal Singh Cheema attacked the state police chief, claiming that he was posing a threat to peace and amity in the state.

"The DGP had an eight years stint in the IB and he still has links there," Mr Cheema claimed.

Lok Insaaf Party legislator Simarjeet Singh Bains claimed that the questioning of the pilgrims had exposed the conspiracy behind the DGP's purported statement. Mr Bains said the police chief should be removed and a First Information Report (FIR) lodged against him.

The DGP was under fire earlier over his remarks suggesting that that the Kartarpur Corridor was prone to misuse by Pakistani agencies. On Tuesday, Chief Minister Amarinder Singh told the House that the top cop had tendered an apology over the remarks.