Aman Mani Tripathi was caught when he allegedly argued with officials during a medical screening and drove off. 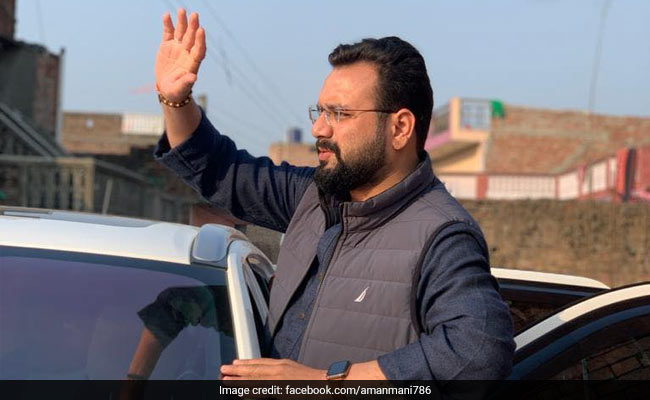 A controversial Uttar Pradesh MLA, Aman Mani Tripathi, has been arrested in neighbouring Uttarakhand for violating the coronavirus lockdown and trying to travel to the Badrinath and Kedarnath shrines. The independent MLA was allegedly travelling in a large group to the shrines, claiming he wanted to offer prayers for UP Chief Minister Yogi Adityanath's father, who died last month.

With this excuse, Aman Mani Tripathi had reportedly secured special permission from the Uttarakhand Additional Secretary Om Prakash. Six others from his group were also arrested.

The MLA and nine others, travelling in three cars, were stopped on Sunday night after they had crossed four districts across the two states. All of them have been charged.

Mr Tripathi was caught when he allegedly argued with officials during a medical screening and drove off.

"Aman Mani Tripathi had come from Uttar Pradesh, along with others in three vehicles. They were stopped at Gauchar barrier. Without stopping they carried on and reached Karnaprayag. An argument ensued with the doctors and administration officials deployed for screening. The group was forced to return," a senior official, Vaibhav Gupta, was quoted as saying by news agency ANI.

An FIR has been lodged against the MLA and 10 others. "After being arrested, they were served a notice and sent back to Uttar Pradesh," senior police officer Ashok Kumar told ANI.

Uttarakhand officials have questioned the MLA's claim about prayers for Yogi Adityanath's father when the Chief Minister himself did not attend his funeral. Yogi Adityanath, who is from Uttarakhand, had said he would not go for his father's last rites because of his state's fight against coronavirus and the lockdown.

"On what authority was Aman Mani Tripathi claiming to offer prayers," an official questioned.

The UP government put out a statement condemning Mr Tripathi for using the Chief Minister's name. "Aman mani tripathi was not authorised by Yogi Adityanath or anyone in the UP government to travel to Uttarakhand . He is responsible for his actions and trying to use the name of the UP chief minister is condemnable," said the statement.

Badrinath shrine is expected to open on May 15 while devotees will not be allowed in Kedarnath for now as a precaution against the highly contagious COVID-19.