UP Assembly Elections 2022: After the video went viral, the Information and Public Relations Department of Uttar Pradesh tweeted screenshots of news reports and said they are "baseless and false". 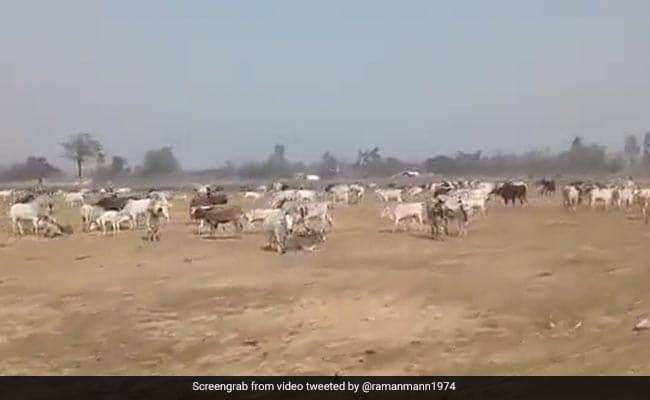 A widely circulated video of stray cattle reportedly released by farmers near the venue of Chief Minister Yogi Adityanath's rally in Barabanki to highlight the stray cattle menace, is "baseless" and "untrue", the Uttar Pradesh government has said.

"Before Yogi Adityanath's event in Barabanki, farmers drove hundreds of cattle from the fields and left them near the rally site. The farmers couldn't find a way out to handle these stray cattle," Mr Mann tweeted. "For five years the UP government also couldn't find a solution. The farmers wanted to see what solution the BJP brings before the event," he tweeted.

After the video went viral, the Information and Public Relations Department of Uttar Pradesh tweeted screenshots of news reports and said they are "baseless and false".

The tweet added that Barabanki police have said no such incident took place near the rally venue and urged people to be cautious against sharing such "misleading information".

"They removed all the stray cattle from the venue. BJP leaders are now alleging that it was a conspiracy by Samajwadi Party and police are claiming nothing like this happened," he said.

Stray cattle are turning out to be a menace in Uttar Pradesh, especially in rural areas where they enter fields and destroy crops.

Reports from the ground, including by NDTV reporters, indicate that the problem is forcing farmers to fence their fields with barbed wire and spend sleepless nights protecting their crops.

Addressing a rally last week, Prime Minister Narendra Modi assured that the problem will be solved if the BJP retains power in the state.

The opposition Congress hit back, criticising the BJP government for "ignoring" the matter for the last five years.