The export of the fiery chillis, also known as "Raja Mircha" and "Bhoot Jolokia", has come as a major boost to the trade of products with Geographical Indications (GI) from the north-eastern region. 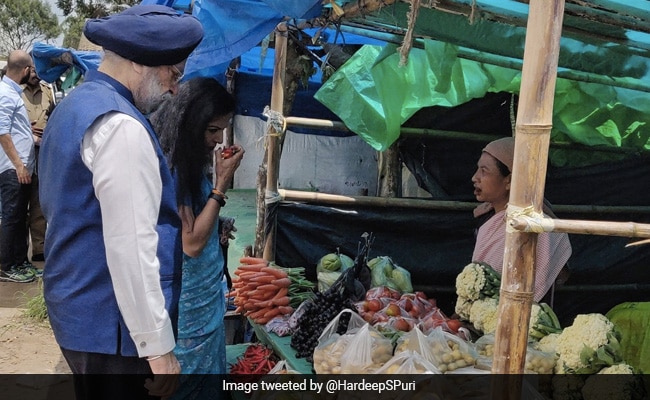 The images shared by Hardeep Puri showed him walking down a vegetable market and buying the chillies.

Union Minister Hardeep Singh Puri said that the “king of chillies” from Nagaland, also known as the Bhoot Jolokia (ghost pepper), has been exported to the United Kingdom via Guwahati by air for the first time. Sharing images of the fiery chillies, also known as “Raja Mircha”, the Minister for Housing and Urban Affairs recalled his visit to a vegetable market in Meghalaya with his wife and former diplomat Lakshmi Puri in August 2019 when they had a "brush" with the chillies at a local shop. The export has come as a major boost to the trade of products with Geographical Indications (GI) from the north-eastern region.

The king of chillies from Nagaland exported to London via Guwahati for the first time.

Reminds me of our brush with this famous variety of fiery chillies when Lakshmi & I stopped by at a roadside vegetable market during our trip to Meghalaya in August 2019. https://t.co/Od298o5huQpic.twitter.com/93JLpQa2gc

The images shared by him showed the Union minister and his wife walking down a vegetable market and buying the chillies.

In 2008, Bhoot Jolokia got its GI certification, an intellectual property right that safeguards the creation and sale of a product originating in distinct geography and culture.

The Press Information Bureau said in a statement that the Bhoot Jolokia is considered the world's hottest chilli based on the Scoville Heat Units (SHU). The amount of capsaicin (a chemical compound) present in peppers is checked with the help of the Scoville scale. Capsaicin is responsible for making the tongue burn, body sweat and ears turn red.

In a major boost to exports of Geographical Indications products from the north-eastern region, a consignment of ‘Raja Mircha' also referred as king chilli from Nagaland exported to London via Guwahati by air for the first time.

The consignment exported to London was sourced from Tening area in Peren district of Nagaland and was packed in Guwahati for its onward journey.

Exporting fresh chillies posed a challenge because of their highly perishable nature. So, APEDA, the apex body which promotes the export of agricultural products from the country, collaborated with the Nagaland State Agricultural Marketing Board to ensure the product reaches its destination without any problem.

APEDA said it would continue to focus on the north-eastern region to bring it on the export map. In 2021, it facilitated exports of  Lemon of Assam to London, Assam red rice to the United States, Leteku ‘Burmese Grape' to Dubai, jackfruits from Tripura to Germany and London.