Sanjay Raut, a Rajya Sabha lawmaker and spokesman, was responding to speculation that Aaditya Thackeray, chief of the Yuva Sena, the party's youth wing, may enter the poll fray. Assembly polls in Maharashtra are scheduled later this year. 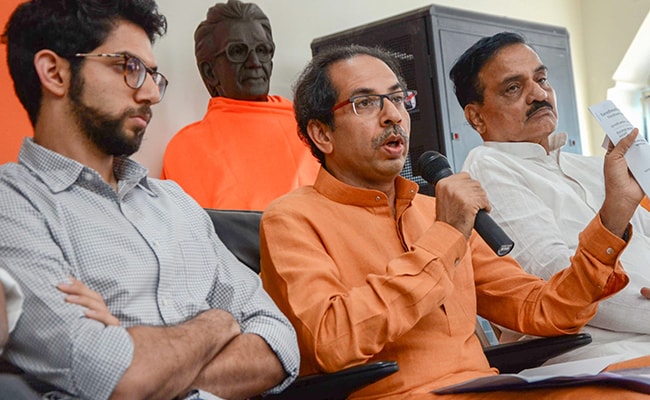 Shiv Sena chief Uddhav Thackeray will take a call on whether or not his son Aaditya Thackeray will contest the upcoming assembly polls in Maharashtra, party leader Sanjay Raut said Wednesday.

Mr Raut, a Rajya Sabha lawmaker and spokesman, was responding to speculation that Aaditya Thackeray, chief of the Yuva Sena, the party's youth wing, may enter the poll fray. Assembly polls in Maharashtra are scheduled later this year.

The 28-year-old Thackeray scion is playing an active role in the Shiv Sena's preparations for the assembly polls to ensure the party, founded by his grandfather Bal Thackeray, wins the maximum number of seats, he said.

No member of the Thackeray family has ever fought an election in the 53-year-old history of the party.

"Aaditya is involved in the Sena's preparations for the assembly elections to ensure maximum candidates of the party win. He himself has clarified that any decision regarding his entry in the poll arena will be taken by party president Uddhav Thackeray," Mr Raut told a Marathi news channel.

To a query on speculation about Aaditya Thackeray becoming Deputy Chief Minister in the event of the BJP-Sena combine retaining power, Mr Raut said, "A Thackeray doesn't take a deputy's post. A family member is always the chief. The family has prestige in state and national politics."

To a query on remarks by senior BJP leaders Sudhir Mungantiwar and Chandrakant Patil regarding chief minister's post and number of seats to be contested by the two parties, Mr Raut said Uddhav Thackeray and BJP president Amit Shah will decide on the matter.

"When the alliance was formalised, discussions happened only between Uddhav Thackeray and Amit Shah. So, any comment regarding chief minister's post will be made by either of them."

Last week, Mr Patil had said that of the total 288 assembly seats, the BJP and the Sena will contest 135 each and leave the remaining 18 for other allies.

Mr Mungantiwar, BJP leader and finance minister, had said Monday that the next chief minister of Maharashtra will be from his party again.

The Sena and the BJP had contested the 2014 assembly polls separately, but the Uddhav Thackeray-led party joined the government later.

Of the total 288 seats, the BJP had won 122 and emerged as the single largest party.

The Maharashtra-centric Sena, which ruled the state for four years in alliance with the BJP in the 1990s, came a distant second with 63 seats.