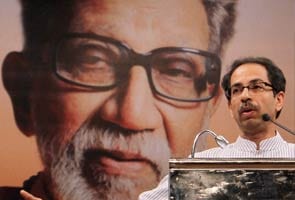 Mumbai: For the second day in a row, Shiv Sena president Uddhav Thackeray has voiced criticism of Gujarat Chief Minister Narendra Modi. The Sena is an ally of Mr Modi's party, the BJP. Mr Thackeray has been warning it to re-think any plans to project Mr Modi as its prime ministerial candidate.

In an editorial in his party's newspaper today, Mr Thackeray responded to reports that Mr Modi and his bureaucrats flew into Uttarakhand and rescued 15,000 Gujarati tourists in a day."It would be better if Modi's propagandists exercise restraint in future," Mr Thackeray said.

At a press conference later in the day, Mr Thackeray seemed to have mellowed down. Clarifying his stand, Mr Thackeray said, "Mr Modi is not our enemy. We didn't criticise him. We have expectations from him and had expressed our displeasure."

In his editorial, Mr Thackeray had said that it was inappropriate for Mr Modi to have devoted his mission - described in the media as "a Rambo act" - to people from his state."Most of the rescue work is being carried out by the Indian Army and the Indo-Tibetan Border Police. They don't discriminate on the basis of the victims' state of origin or religion," he stressed.

He praised Maharashtra Chief Minister Prithviraj Chavan, who visited Uttarakhand yesterday, for dropping off supplies meant not just for pilgrims from his state, but for "victims from across the country."

Mr Modi's elevation to campaign chief led to the powerful Bihar party, the Janata Dal (United) or JD(U), ending its alliance with the BJP.  Like the Shiv Sena, the JD(U) was a member of the main opposition coalition that's led by the BJP.

Promoted
Listen to the latest songs, only on JioSaavn.com
Mr Thackeray suggested in an editorial yesterday that placing Mr Modi as the face of its campaign will prevent the BJP from collecting allies who are crucial in posing a challenge to the ruling coalition led by the Congress. "Do new allies grow on trees?" was one of the rapid-fire questions he put to the BJP yesterday.