"Will Study And Decide": Uddhav Thackeray To Richard Branson On Mumbai-Pune Hyperloop Project

Richard Branson met Uddhav Thackeray in Mumbai to clear "misunderstandings" and gauge the new administration's interest in the USD 10 billion project, which promises to cut the travel time between Mumbai and Pune to less than half and hour. 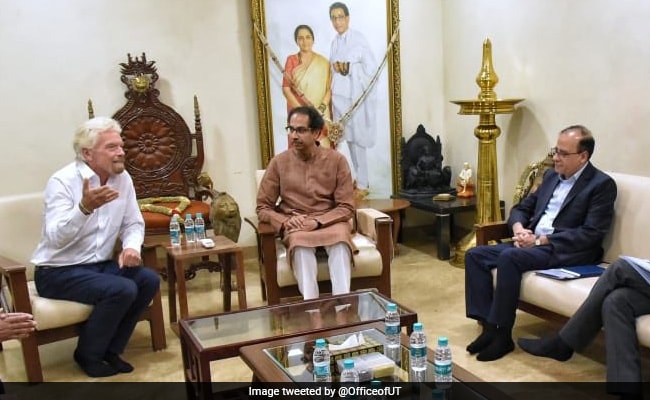 Mr Branson met Uddhav Thackeray in Mumbai to clear "misunderstandings" and gauge the new administration's interest in the USD 10 billion project, which promises to cut the travel time between Mumbai and Pune to less than half and hour.

The meeting took place at "Matoshree'', the Thackeray family residence in suburban Bandra.

"The chief minister told Mr Branson that he would study the project and take decision," the official added.

The Original Project Proponent (OPP) agreement of the project is ready, the official said.

At an event here on Wednesday, Richard Branson had said the  entire cost of the project will be borne by the private sector and it will not depend on any funding from the state.

"We just need to see whether the new government is so keen as the old government (on the project)," he had added.

In July, the then state cabinet, headed by Devendra Fadnavis, had accorded the status of "infrastructure" to the project.

It had also approved formation of a consortium of DP World FZE and Hyperloop Technologies as "proponents"of the project.

Hyperloop train, the government had said then, will run from BKCin Mumbai to Wakadin Pune, covering a distance of 117.5 km in just 23 minutes. Ordinary trains take over three hours for travelling between the two cities.

Hyperloop is the name given to a technology originally conceived by Tesla Inc boss Elon Musk, wherein vacuum is used to transport "pods'' carrying people. The technology is yet to be commercially launched.

Richard Branson's Virgin Hyperloop One had stunned all by announcing the project when Mr Fadnavis was chief minister, and
promised to get the project going by 2020.