Addressing a farmer's meet, he reiterated that the Prime Minister's Office was directly involved in talks with the French side on the Rafale fighter jet deal. 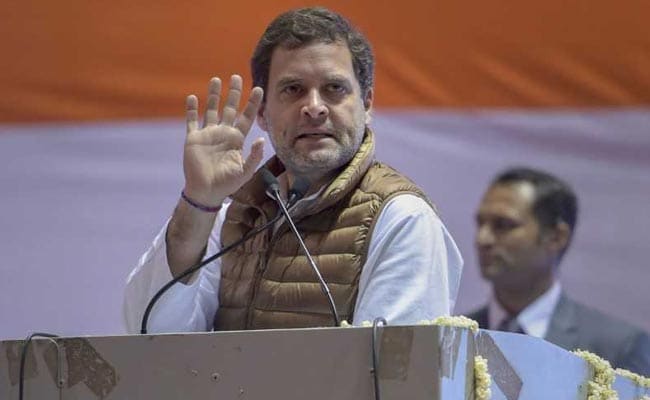 The Narendra Modi government announced monetary support of a mere Rs 6,000 per year for small and marginal farmers while "writing off" loans amounting to Rs 3.5 lakh crore for 15 big industrialists, news agency PTI quoted Congress president Rahul Gandhi as saying on Friday. The Congress -- on the other hand -- would ensure minimum income guarantee for the poor if elected to power after the upcoming Lok Sabha polls, he added.

According to the news agency, Mr Gandhi -- who was addressing a Kisan Aabhar Sammelan (thanksgiving rally for farmers) in Bhopal -- also reiterated that the Prime Minister's Office was directly involved in talks with the French side on the Rafale fighter jet deal.

The Congress president said that while all the BJP members hailed the announcement of cash support for farmers when the interim Union Budget 2019-20 was presented, it eventually came down to beneficiaries getting assistance of just Rs 17 a day. "The government wrote off Rs 3.5 lakh crore in loans for 15 big industrialists, but gave just Rs 17 per day to farmers. If you further divide that amount, it comes down to Rs 3.5 per person," he said at the event, which was also attended by Madhya Pradesh Chief Minister Kamal Nath.

Mr Gandhi's allegations came on a day when the Modi government faced renewed allegations of discrepancies in the Rafale deal after English daily The Hindu published a defence ministry note objecting to the involvement of the Prime Minister's Office. The Congress president claimed that it conclusively established PM Modi's involvement in the deal, making the Supreme Court judgment on the matter questionable on the grounds that "information was withheld".

The internal note, dated November 24, 2015, said the position of the Prime Minister's Office was "contradictory to the stand taken by Ministry of Defence and the negotiating team" . It also claimed that such discussions substantially undermine their negotiating position.

The Congress had announced loan waivers for farmers, fulfilling a pre-poll promise, soon after coming to power in Madhya Pradesh, Rajasthan and Chhattisgarh recently.