SP lawmaker from Suar Abdullah Azam has been detained for obstructing the raids and creating hurdles in the government work, Rampur SP Ajaypal Sharma said. Presently 50 boxes of 2,500 rare books with stamps have been recovered, the police said.

Till now, 2,500 rare, stolen books have been recovered from the university, founded by Azam Khan, in the raid which began on Tuesday, police said.

Presently 50 boxes of 2,500 rare books with stamps have been recovered, a senior official said, adding the probe in the matter is on.

The recovered books are ancient and valuable, he said. 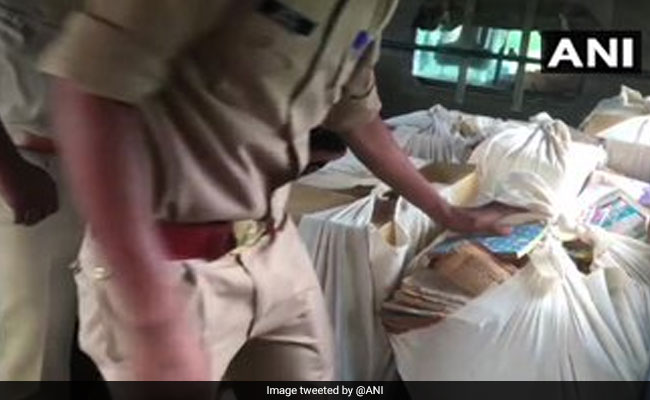 Madrasa Aliya is about 250 years old.

Investigation in the case began on June 16 after Zubair Khan, principal of Oriental College in Rampur, earlier known as Madarsa Aliya, lodged an FIR alleging over 9,000 books were stolen and taken to the library in Jauhar University.

Madrasa Aliya is about 250 years old.

After news of Abdullah's detention reached the state capital, SP leaders led by their state president Naresh Uttam gathered at the party office here and marched towards Raj Bhavan to meet Governor Anandiben Patel, hoping to get her to intervene in the matter.

They staged a dharna outside the governor''s official residence as they had not taken prior appointment.

Raising slogans against the Yogi Adityanath government, the SP leaders including lawmakers and MLCs alleged their party men were being deliberately harassed and framed in fake cases.

"The BJP government is working to settle political vendetta. SP workers are murdered and being framed in fake cases. We will continue to fight for the cause of the people," said Naresh Uttam.

The police, who used mild force, removed the SP protestors and took them to Police Lines.

"We removed them to ensure smooth flow of traffic. None of them have been arrested. They were taken to Police Lines," said SP, East, Suresh Chandra Rawat.

On directives of party president Akhilesh Yadav, all SP leaders of Bareilly, Pilibhit, Sambhal, Amroha, Moradabad and Bijore have been asked to reach Rampur on Thursday morning to protest on behalf of Azam Khan, said a party leader.