Tripura Chief Minister Biplab Deb had said that the epic Mahabharata indicated that ancient India had internet and satellite communications. Else Sanjay could not have been updating blind king Dhritarashtra about the battle in Kurukshetra while sitting at the palace in Hastinapur, Mr Deb argued. 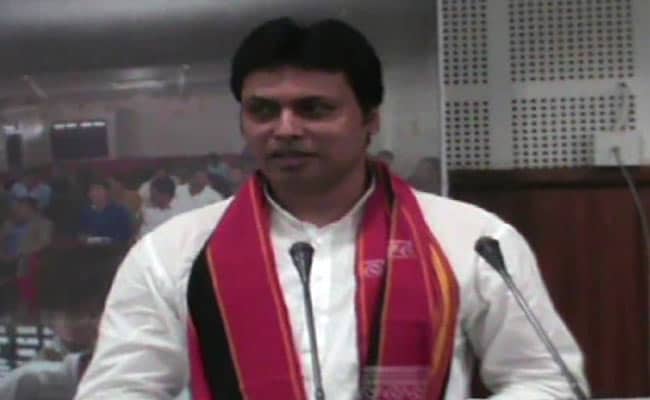 Biplab Deb said internet and satellite communication was there during Mahabharat era.

New Delhi: Tripura Chief Minister Biplab Deb -- who claimed that internet and satellite communications existed in India thousands of years ago -- stuck to his guns today, directing a barb at the "narrow minded people who find it tough to believe this". His reason was not facts accepted by scientific community about what took place several thousands of years ago, but that "Indians should consider their nation to be the greatest".

Tripura Chief Minister's observations about the happenings of the Puranic period are topical. It is virtually impossible to conceive of devices like 'Divya drishti',Pushpaka Ratha',etc without some kind of prototype and study thereon

"Every Indian should have a common thinking that India is best and superior country all around the world," the Chief Minister said today. "My country had the technology years ago, which no country had. I am proud of that and I think every Indian should feel proud. I want to repeat that we should accept the truth and should not get confused". He, however, acknowledged that there were narrow minded people who "want to belittle their own nation and think highly of other countries".

At an event yesterday, Mr Deb declared that the epic Mahabharata indicated that ancient India had internet and satellite communications. Else Sanjay could not have been updating blind king Dhritarashtra about the battle in Kurukshetra while sitting at the palace in Hastinapur, Mr Deb argued.

While many right-wing thinkers earlier concluded that this was evidence of television technology, Mr Deb was convinced that it something even more advanced. "There was technology available at that time... internet was there, satellite communication was there... The Europeans and the Americans may claim that it is theirs, but it is actually our technology," Mr Deb said.

Promoted
Listen to the latest songs, only on JioSaavn.com
His comments have had Twitter laughing since yesterday.

There were those that looked for other "evidence". And some just had fun day dreaming.

On the Kauravs whatsapp group:
Duryodhan: Bros, plz put a selfie on profile so i know who is who!
(99 oks) #Mahabharata#BiplabDeb

Regarding Mr Deb's charge of "narrow-minded ness", a Twitter user posted: "not only anti Hindu but narrow minded as per the Tripura CM Biplab Deb. Hope I don't get treason charges for this tweet-ROFL."