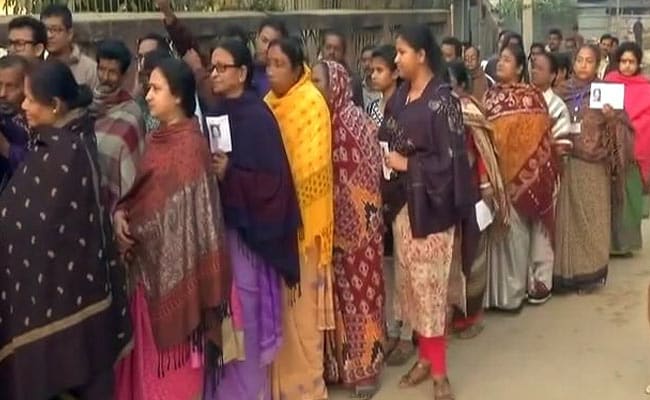 Tripura Assembly Polls Result 2018: Over 92 per cent of Tripura's voters voted on February 18.

Agartala: Both the ruling CPI(M)-led Left Front and the opposition BJP sounded optimistic about forming the next government in Tripura as officials prepared for Saturday's counting of votes cast in the February 18 assembly elections.

"There is no doubt that the eighth Left Front government would be formed after the counting of votes on Saturday. People of Tripura voted for the Left parties on February 18 for peace and steady development in the state," said Mr Dhar, also a CPI(M) central committee member.

"During the election campaign, we have witnessed that the people become fanatic to become free from the misrule of the Left government," a confident Deb said.

Despite large-scale snags in VVPATs (Voter Verifiable Paper Audit Trails) and EVMs (Electronic Voting Machines), over 92 per cent (excluding 50,770 postal ballots) of Tripura's 2,536,589 voters cast their votes in February 18 peaceful elections in 59 of the 60 Assembly seats, setting a new record in the electoral history of India.

Balloting in the Charilam (reserved for the tribals) has been deferred to March 12 after the death of a CPI(M) candidate.

In the 2013 and 2008 Assembly polls, Tripura registered 92 per cent and 91 per cent voting respectively.

In India's 65-year-old electoral history, the CPI(M) has never before come in direct electoral battle with the BJP.

Tripura became a full-fledged state in January 1972 along with Meghalaya and Manipur. The CPI(M) dominated Left Front has been in power since 1978, except for 11 years (1972-1977 and 1988-1993) when the Congress and a breakaway faction led by five Chief Ministers were at the helm in the state.

During 1988-1993, the Congress in alliance with the tribal party Tripura Upajati Juba Samity, ruled the state.

The Congress, which fought Assembly elections in alliance with the tribal party since 1983, entered the poll battle alone this time.

The BJP previously fought elections alone but has since aligned with the IPFT, which since 2009 has been agitating for a separate state comprising areas under the Tripura Tribal Areas Autonomous District Council.

The separate state demand has been rejected by all political parties.

A total of 292 candidates, including 23 women and many independents, are in the fray.

The ruling CPI(M) has fielded 56 candidates, leaving one seat each to its Left Front partners -- the Communist Party of India, Forward Bloc and Revolutionary Socialist Party.

The Bharatiya Janata Party (BJP) is contesting in 50 seats and left nine seats for its ally, the Indigenous People's Front of Tripura (IPFT).

The Congress fielded candidates for all 59 constituencies. However, its official nominee, Sukumar Chandra Das in Kakraban-Shalgarha Assembly seat (Scheduled Caste reserved seat), withdrew his nomination and joined the BJP.

The Trinamool Congress has fielded 24 candidates.

Of 60 seats, 20 are reserved for tribals and 10 for Scheduled Caste.

Additional Chief Electoral Officer Tapas Roy told IANS that 59 counting halls would be set up 20 locations across Tripura to count votes simultaneously of all the 59 assembly constituencies.

He said that metal detectors and six CCTVs in each counting hall would be installed while videography would be done to record the entire counting process. First the postal ballot would be counted and the votes of EVMs.

Prohibitory orders 144 Cr Pc has been promulgated in and around the all 20 counting places as precautionary measures.

The Election Commission has appointed 27 general observers to oversee the counting process.