15 Transgender Couples Get Married At Mass Wedding In Chhattisgarh

The ceremony was conducted in traditional Hindu ceremonial style with pre-wedding rituals of ''haldi'', ''mehendi'', engagement and ''sangeet'' held a day earlier on Friday. 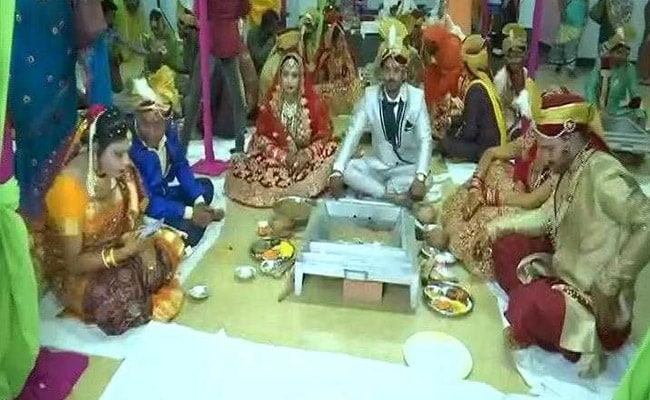 The event conceived by Raipur-based transgender saw couples from Chhattisgarh and other states.

Fifteen couples got married in a mass wedding ceremony organised for the transgender community on Saturday.

The ceremony was conducted in traditional Hindu ceremonial style with pre-wedding rituals of "haldi'', ''mehendi', engagement and 'sangeet' held a day earlier on Friday.

"This should have happened a long time ago because we transgenders don't have anybody to share out joys and sorrows. Nobody understands our sorrows. Today the government has given us such a good scheme and has given us an opportunity to get married. I thank them profusely" said Madhu Kinnar, a transgender and the mayor of Raigarh in Chhattisgarh who attended the event.

"We are getting life partners, what can be better news than this?" said Ms Madhu adding that the marriage was the first of its kind in the country and hopefully it will set a trend for future such events.

According to the 2014 Supreme Court judgement, transgenders are now recognised as "third gender" and enjoy constitutional rights and freedom.

The event conceived by Raipur-based transgender and social activist Vidya Rajput saw couples from Chhatisgarh and other states.