Top US Commander in Afghanistan Makes Rare Visit to India 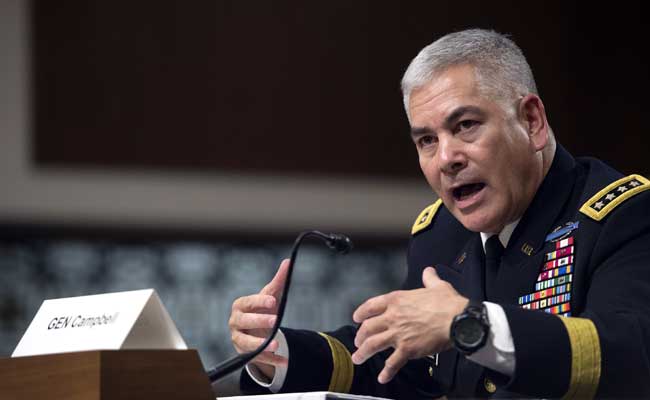 Commander of US and NATO forces in Afghanistan General John Campbell

New Delhi: In a first of its kind development, a top American commander in Afghanistan recently visited India to hold talks with senior Indian leadership on the country's role in the war-torn Afghanistan vis-a-vis Pakistan and China.

Commander of US and NATO forces in Afghanistan General John Campbell told members of the House Armed Services Committee during a Congressional hearing on Thursday that he travelled to New Delhi to discuss Afghanistan's situation with Indian leaders.

"What that means to China and Pakistan. It's quite helpful for me and also to explain how Afghanistan is tied into that," he said.

General Campbell said Afghan President Ashraf Ghani was reaching out to the entire region as part of his effort to push the country on the path of sustainable peace and development.

"I think it's quite helpful. Last Monday I was in Germany for a day with General Austin. We brought the chiefs of defense from five other countries surrounding Afghanistan to bring them together to talk Pakistan, Turkestan, Uzbekistan and Kazakhstan," he said.

"All came together to talk about regional issues, border issues, drug smuggling, what they can do to enable each other to fight this common enemy so it was quite good," General Campbell said.