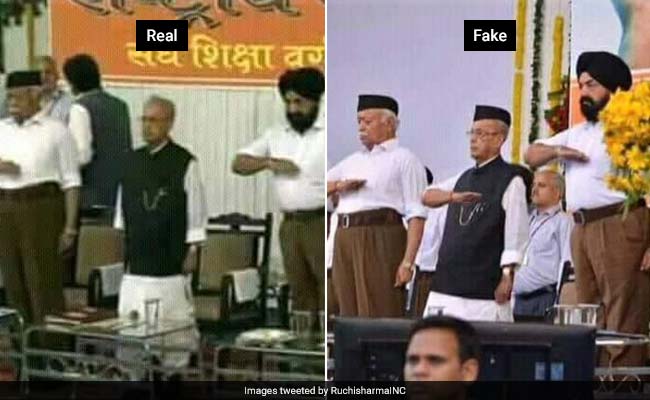 The morphed photo (right) of former President Pranab Mukherjee at the RSS event in Nagpur.

New Delhi: Hours after his speech at the Rashtriya Swayamsevak Sangh (RSS) headquarters in Nagpur, a morphed picture of former President Pranab Mukherjee surfaced on social media. In the photo, Mr Mukherjee is seen raising his hand up to his chest in the RSS way of salutation along with leaders of the organisation. In reality, Mr Mukehrjee had stood in attention. The image prompted his daughter and Congress leader Sharmistha Mukherjee to say that as she had feared and cautioned her father against, the "dirty tricks department" of the BJP-RSS was at work in full swing.

"See, this is exactly what I was fearing and warned my father about. Not even few hours have passed, but BJP/RSS dirty tricks dept is at work in full swing!" she said, retweeting a tweet showing the "morphed" picture of Pranab Mukherjee performing the RSS salute along with its leaders in Nagpur.

Ms Mukherjee had on Thursday said her father was giving the BJP and the Rashtriya Swayamsevak Sangh a handle to plant false stories.

"Hope @CitiznMukherjee now realises from todays' incident, how BJP dirty tricks dept operates. Even RSS wouldn't believe that u r going 2 endorse its views in ur speech. But the speech will be forgotten, visuals will remain & those will be circulated with fake statements," the former President's daughter tweeted.

Her warnings came soon after rumours about her joining the BJP came up ahead of Mr Mukherjee's visit to Nagpur. She dismissed the "rumours" of her joining the BJP as "false" and alleged they were the handiwork of the BJP's "dirty tricks department".

Promoted
Listen to the latest songs, only on JioSaavn.com
She said she would rather leave politics than quit the Congress.

Earlier on Thursday, Pranab Mukherjee was warmly welcomed at the RSS headquarters, where he paid homage at the memorial of KB Hedgewar, the founder of the RSS. "Today I came here to pay my respect and homage to a great son of Mother India," he wrote in the visitor's book at the memorial.