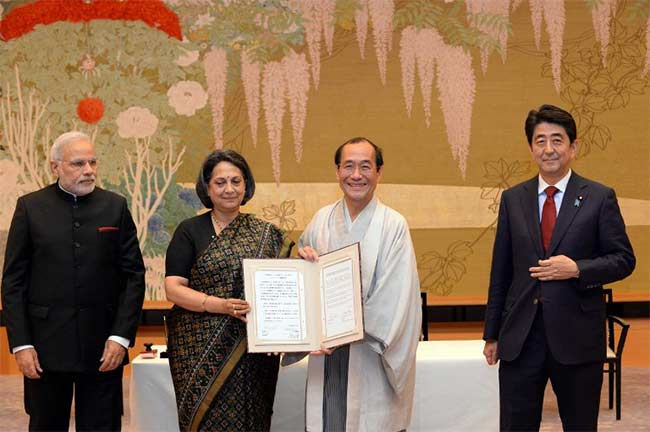 Tokyo: Not a minute to lose, that seems to be the priority of Prime Minister Narendra Modi as he began his four-day bilateral visit to Japan. Within a couple of hours of his arrival, an agreement has been signed between the cities of Kyoto and Varanasi, two cities which the External Affairs Ministry says will be partners in heritage.

The Kyoto-Varanasi agreement which was signed in the presence of Prime Minister Modi and his Japanese counterpart Shinzo Abe comes a day ahead of Mr Modi's day long effort to understand what makes Kyoto tick.  As per the agreement, both the cities will endeavour to strengthen exchanges and cooperation in the fields of culture, arts, academics, heritage conservation and city modernisation.

An ancient city and a hub of ancient Buddhist traditions, Kyoto has been able to effectively blend its culture and heritage with cutting edge technology. For Prime Minister Modi, the Kyoto model could be essential in the process of rejuvenating Indian cities, a priority mission for this government.

Tomorrow, in addition to visiting the ancient Toji temple, the PM is scheduled to meet leaders in the city to learn about effective governance and management of a historic city. He is also expected to learn about advances made in Japan in stem-cell research. He flies out to Tokyo tomorrow evening.

Prime Minister Modi's visit to Japan began on a strong personal note - Prime Minister Abe, who enjoys a friendly relationship with him chose to personally travel to Kyoto to meet Mr Modi even though delegation level talks between the two countries are still two days away. The two leaders also had dinner together.

Promoted
Listen to the latest songs, only on JioSaavn.com
Prime Minister Modi has accorded great importance to this visit, his first bilateral visit outside the subcontinent. India and Japan already enjoy a global strategic partnership but both sides now want to enhance that equation.