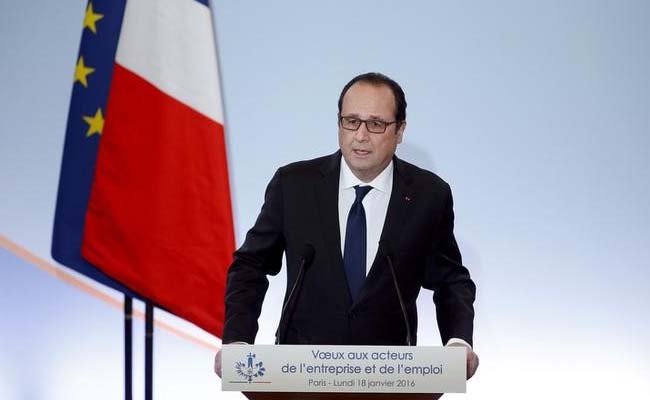 French President Francois Hollande will be chief guest at the Republic Day parade in Delhi on January 26.

Mr Hollande will be chief guest at the Republic Day parade in Delhi on January 26.

He will arrive in Chandigarh on January 24 and is expected to be received by Prime Minister Narendra Modi.

Both leaders will hold extensive talks to strengthen counter-terror cooperation in the aftermath of the Paris and Pathankot terror attacks.

"The focus will be largely on terrorism, considering the current situation across the world. Terrorism will be high on the agenda. We are working closely with security forces to prevent any action against the French delegation," Mr Richier told reporters in New Delhi.

"The second element is climate. We will focus on the implementation of the joint declaration on climate announced in April. Both countries will follow up on the decisions taken at the Paris climate conference," he added.

He added: "There will be memorandums on smart cities; we'll work on energy storage, solar alliance and programme. We will have announcements in the field of space. We'll announce new projects on space programme in relation to observation and prevention of climate change. We'll also have investments in the wind energy."

There will also be talks and announcements in the field of biotechnology and sports.

"We've made new progress in the conceptual marine biotechnology research centre announced in April. We'll have initiated news steps in the field of sports, including football and hockey. Three additional MOUs between higher education institutions from France and India are in the pipeline. We'll also work on promoting exchanges in higher education," the ambassador added.

On the issue of terrorism, Mr Richier said: "Sharing of threat assessment will be undertaken. Some terror organisations are very regional in nature and well networked. So, it is good to understand the dynamics, how networking of Al Qaeda or Islamic State is developing or growing. We also need to assess how terror is travelling across the world."

Asked on civil nuclear cooperation, he said Paris-based Areva - French multinational group specialising in nuclear and renewable energy - was being taken over by UK-based EDF Energy, which operates 60 nuclear reactors in France.

"Now, EDF will be in the lead for this kind of operation. It is changing the way nuclear negotiations are being conducted. The main development will probably be taken into account," he said.

The French President will land in Chandigarh around 1 pm on Sunday (January 24) and spent a few hours in the city.

He will meet a French delegation at the Indo-French forum, engage with business community in Chandigarh. A series of economic agreements will be signed with regard to partnerships between India and French companies.

During the French President's visit, both the countries will also sign MoUs on smart cities. Chandigarh will be developed into a smart city by partnership of both countries.

"A study is being conducted by French and Indian Railways on introducing high-speed trains between New Delhi and Chandigarh," he added.

On January 25, the visiting President will be accorded a ceremonial welcome at the Rashtrapati Bhavan in Delhi. He will visit Rajghat, meet External Affairs Minister Sushma Swaraj and attend a press conference at the Hyderabad House in the national capital.

The president will participate in a solar alliance event in Gurgaon. A meeting with Vice President Hamid Ansari and a state banquet at Rashtrapati Bhavan are also on his itinerary.

On January 26, Mr Hollande will be chief guest at the Republic Day parade in Delhi. Thereafter, he'll attend 'At Home' tea at the Rashtrapati Bhavan and leave for Paris.