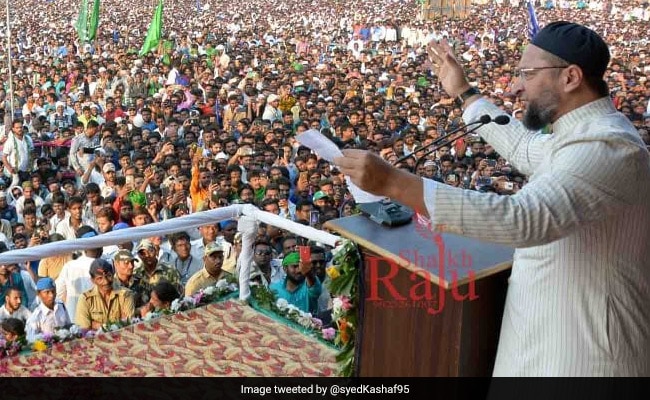 Akbaruddin Owaisi, the star campaigner for the party, registered an emphatic win.

The Asauddin Owaisi-led All India Majlis-E-Ittehadul Muslimeen (AIMIM) Tuesday won seven of the eight seats it contested in the Telangana assembly polls, retaining its hold in its traditional bastion of the Old City of Hyderabad.

All the seven sitting MLAs, including Asauddin Owaisi's brother Akbaruddin Owaisi, were re-elected.

MIM won in seven assembly constituencies for the first time in 2009 and repeated the feat in 2014.

Akbaruddin Owaisi, the star campaigner for the party, registered an emphatic win in Chandrayangutta seat, his fifth in a row since 1999, with a margin of 80,263 votes.

Similarly, AIMIM candidate Mohd Moazam Khan was declared elected from Bahadurpura constituency in the city by 82,518 votes against TRS candidate.

Mr Khan made a hat-trick from Bahadurpura and secured 96,993 votes while Inayath Ali Baqri of TRS managed 14,475.

MIM's Kausar Mohiuddin, who trailed by over 6,000 votes after the ninth round against BJP candidate Amar Singh in Karwan Assembly segment, made a remarkable comeback to emerged the winner by over 50,000 votes.

MIM had fielded candidates in eight of the 119 assembly segments, while supporting the TRS elsewhere.

Mirza Rahmat Baig fielded in Rajendranagar, which the party contested as the additional seat this time, was the lone loser.