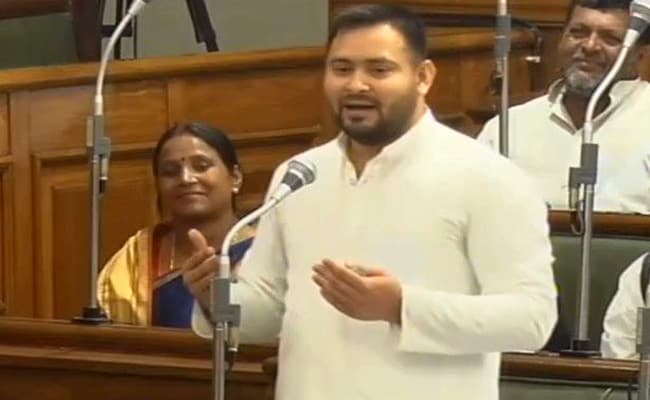 Tejashwi Yadav slammed the Bihar government asking "Whose regime can be termed as 'Jungle Raj'?"

Leader of Opposition in the Bihar assembly Tejashwi Yadav today criticised the state government over rise in crime, saying it has doubled in the state under NDA rule than what was during the 15-year regime of the RJD under Lalu Prasad Yadav-Rabri Devi.

Participating in a debate during motion of thanks on Governor's address to a joint sitting of the state legislature, Tejashwi Yadav said that number of cognisable offence cases was 97,850 when the RJD rule ended in 2005, but the number rose to 1,96,911 cases in 2018 during NDA regime, registering a 101.2 per cent of growth.

"Whose regime can be termed as 'Jungle Raj'?" the RJD leader asked.

To buttress his point, he cited the National Crime Records Bureau (NCRB) data during RJD rule between 1990 and 2005 and compared it with the figures of the next 13 years relating to NDA regime.

Crime cases were less in undivided Bihar which had 54 districts, in comparison to Nitish Kumar's dispensation across 38 districts, after the creation of Jharkhand, he added.

Reminding Nitish Kumar of his branding the BJP in 2015 as "Badka Jhootha Party" (party of big liars), Tejahshwi Yadav said, Nitish Kumar is "stepney-stooge" of the BJP and has become Chief Minister at the "BJP's mercy".