Protesting Prakash Survey's statement in which he asks supporters to "hit them", Team Thackeray files complaint at Dahisar police station in Mumbai

Maharashtra MLA Prakash Surve in the viral video from a function on August 14.

Uddhav Thackeray's Shiv Sena has filed a police complaint against MLA Prakash Surve — one of the Sena legislators backing Chief Minister Eknath Shinde — for his statement at a function recently: "If you can't break their hand, break their leg. I will come the next day to bail you out."

Mr Surve, who was part of Mr Shinde's mutiny to unseat Uddhav Thackeray, was apparently speaking about the battle over which one's the real Shiv Sena — the one led by Mr Thackeray, or the faction that broke away in Mr Shinde's leadership.

Video clips of Mr Surve's speech are viral on social media. He was speaking at a programme at Kokani Pada Buddha Vihar in Magathane area of Mumbai on August 14.

"If someone says something to you, reply to them," he told the gathering. "No one's dadagiri will be tolerated. You hit them. I, Prakash Surve, am here for you," said the MLA from Magathane segment, pitching himself as their backer, adding, "If you can't break their arms, break their legs. I'll get you bail the next day, don't worry."

He further said, though, "We will not fight with anyone; but if someone fights with us, we will not spare them." 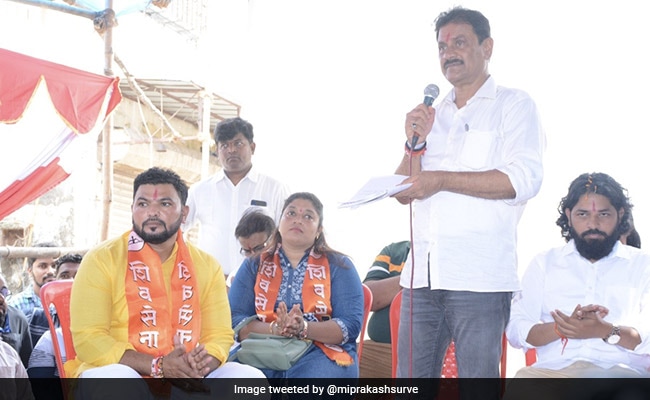 Prakash Surve was speaking at a function on August 14.

Protesting the statement, a complaint has now been filed by the Thackeray faction at the Dahisar police station.

Given the traction the video is getting online, the issue is likely to come up at press conference by the Opposition later today. Chief Minister Shinde's press meet is scheduled after that.

Uddhav Thackeray technically remains the chief of the party founded by his father Bal Thackeray.
But there's a legal battle on over who gets to claim the party.

Backed by the BJP, Mr Shinde took away majority of the Sena MLAs in June to unseat Uddhav Thackeray. And, with more than two-third of the party MLAs with him, he has managed to get his faction recognised as the Sena in the assembly as well.

But getting the party as a whole, symbol and all, is a longer battle that needs proof of majority in the party units as well, besides other requirements. The matter is already in the Supreme Court and the Election Commission.