On June 7, 1893, Mahatma Gandhi was thrown off the train's first class compartment at Pietermaritzburg station for refusing to give up his seat. 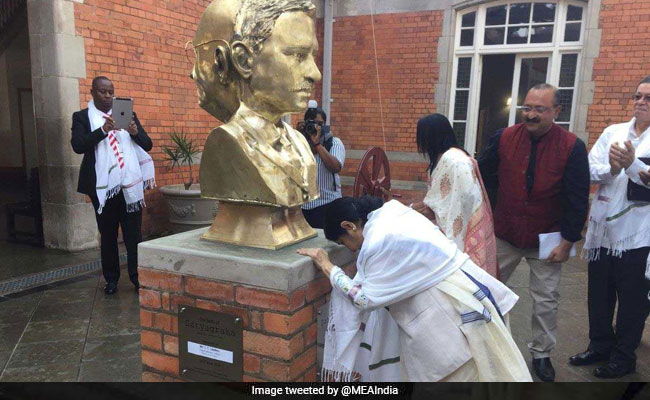 Pietermaritzburg: External Affairs Minister Sushma Swaraj today undertook a train journey from Pentrich to Pietermaritzburg, a railway station where a young Mahatma Gandhi was thrown out of a "whites-only" compartment, an incident that acted as a catalyst for him to practice Satyagraha.

Ms Swaraj, who is in South Africa on a five-day visit, yesterday planted a sapling in the Phoenix settlement where Mahatma Gandhi had developed his philosophy of non-violence during his stay in South Africa.

The journey that acted as a catalyst for Mahatma Gandhi to practise satyagraha! EAM @SushmaSwaraj embarks a train journey from Pentrich station to Pietermaritzburg. pic.twitter.com/ds0zqrAG8e

On the night of June 7, 1893, Mohandas Karamchand Gandhi, who was then a young lawyer, was thrown off the train's first class compartment at Pietermaritzburg station for refusing to give up his seat.

The incident led him to develop his Satyagraha principles of peaceful resistance and mobilise people in South Africa and in India against the discriminatory rules of the British.

Later, the incident of Gandhi being thrown off the train on a cold winter evening would be re-enacted, and his a two-sided bust would be installed on the station platform.