The North East Delhi MP had earlier sought an investigation by the Central Bureau of Investigation (CBI) in the case. He had also met Sushant Singh Rajput's father and other family members at their Patna home in June. 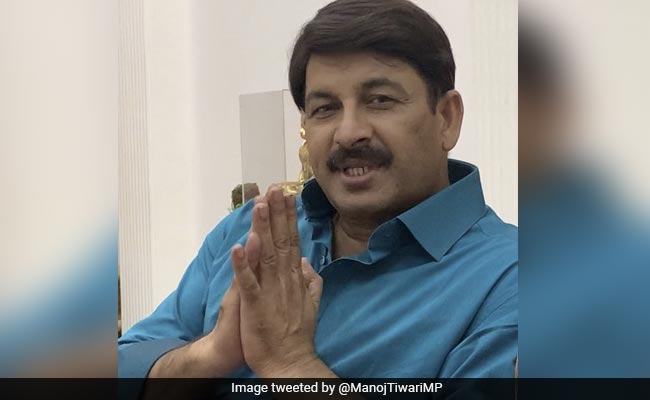 BJP MP Manoj Tiwari on Wednesday welcomed the Supreme Court order paving the way for a CBI probe into the death of Bollywood actor Sushant Singh Rajput, saying it is the victory of justice.

The North East Delhi MP had earlier sought an investigation by the Central Bureau of Investigation (CBI) in the case. He had also met Sushant Singh Rajput's father and other family members at their Patna home in June.

The top court in its order on Wednesday upheld the transfer of an FIR, lodged in Patna against actress Rhea Chakraborty and others for allegedly abetting Sushant Singh Rajput's suicide, to the Central Bureau of Investigation (CBI).

The top court delivered its verdict on a plea by Rhea Chakraborty who had sought transfer of the FIR lodged against her to Mumbai.

"I cannot express how relieved I feel now. Thanks to all those who raised their voice in this case. The (Supreme Court's) order is the victory of justice in the country," said Mr Tiwari, who is also an actor.

"In this case, some families had to go through a post-mortem of their relations, release intimate photographs and go through many dilemmas as the state (Maharashtra) tried to hide the truth. The truth will now get justice in Sushant Singh Rajput's case," he said.

While pronouncing the verdict, the top court said the jurisdiction of the Mumbai Police which is conducting a probe under Section 174 of the Criminal Procedure Code, which deals with the procedure to be followed in cases of unnatural death and suicide, is limited.

It said the Bihar government is competent to transfer the case to the CBI for investigation. It also held that the ongoing investigation done by the CBI is lawful.

The top court, which had reserved its judgement on the plea on August 11, was told by the Bihar government that "political clout" has not allowed the Mumbai Police to even register an FIR in the case.

The Maharashtra government had argued that Bihar completely lacked jurisdiction in the matter.

Sushant Singh Rajput, 34, was dead in his apartment in suburban Bandra in Mumbai on June 14.