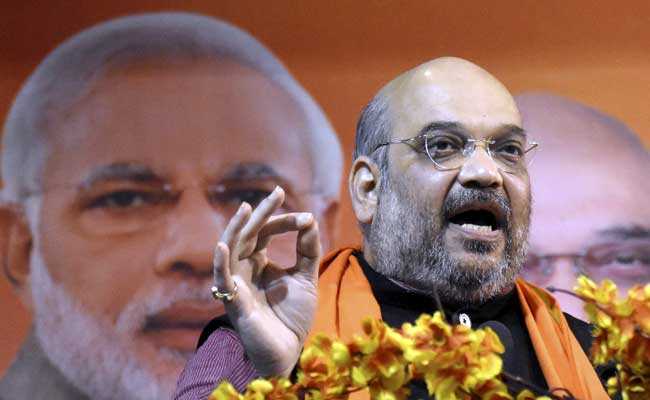 BJP President, Amit Shah said that the parties in power in Uttar Pradesh and Karnataka were answerable for the incidents cited by protesting writers.

Patna: With BJP on the backfoot over beef controversy and the writers' protest against rising intolerance, party president Amit Shah today said that BJP cannot be blamed for incidents which occurred in states ruled by other parties.

Mr Shah was in Bihar, a day after he ticked off a number of party leaders, including Haryana Chief Minister Manohar Lal Khattar, lawmakers Sakshi Maharaj and Sangeet Som, over their controversial comments.

He also said that the parties in power in Uttar Pradesh (UP) and Karnataka were answerable for the incidents cited by protesting writers. Mulayam Singh Yadav's Samajwadi Party is in power in UP, while Karnataka is ruled by the Congress party.

A 52-year-old man was killed by a mob attack for allegedly eating beef in Dadri, Uttar Pradesh last month, while rationalist MM Kalburgi was killed outside his residence in Dharwad, Karnataka in August.

"Law and order is a state issue. You all know that. We have nothing to do with it," said Mr Shah, insisting that the protest by writers was primarily driven by these two incidents.

He was addressing a press conference in Bihar for the first time since assembly elections began.

More than 30 writers have returned their Sahitya Akademi awards against growing intolerance in the country.

He also took on journalists who repeatedly asked him questions over RSS chief, Mohan Bhagwat's comments and recent rows over Dadri mob killing and beef, saying they should declare what is their agenda before that ask about BJP's agenda.

"You are not asking me any question about Bihar or Nitish Kumar's government... Before asking about BJP's agenda, you should tell us about your agenda," Mr Shah said.

He also tried to clear the air over BJP's reservation policy, saying that the party supports the present reservation policy, as Mr Bhagwat's remarks on quota which have been seized by Rashtriya Janata Dal chief, Lalu Prasad to consolidate backward caste votes.

According to Mr Shah, the BJP-led National Democratic Alliance will win 32-34 seats in the first phase of polling, and 22-24 in second phase out of the total 81 seats that have gone to polls so far.