Stan Swamy, 84, who was arrested last year under the Unlawful Activities (Prevention) Act (UAPA) in connection with the Elgar Parishad-Maoist links case, died at a Mumbai hospital on July 5. 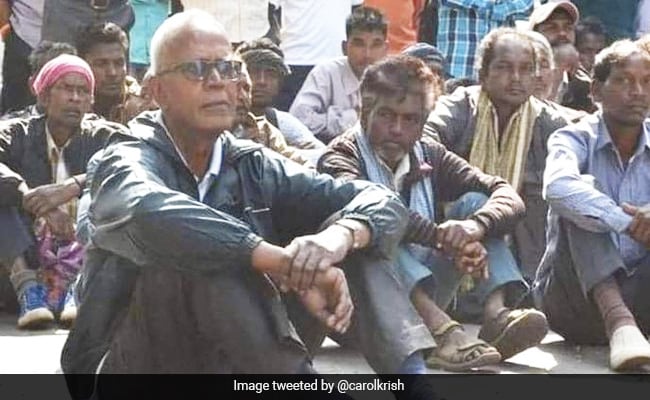 A UN human rights expert has said that she is devastated to hear about the death of Stan Swamy in custody, saying there is no reason for a human rights defender to be denied his rights and that his death will forever remain a stain on India's human rights record.

Stan Swamy, 84, who was arrested last year under the Unlawful Activities (Prevention) Act (UAPA) in connection with the Elgar Parishad-Maoist links case, died at a Mumbai hospital on July 5.

In a statement issued on Thursday, UN Special Rapporteur Mary Lawlor said Father Swamy's case should remind all states that human rights defenders and all those detained without sufficient legal basis, should be released.

"There is no excuse, ever, for a human rights defender to be smeared as a terrorist, and no reason they should ever die the way Father Swamy died, accused and detained, and denied his rights," she said.

India has rejected international criticism over the handling of Stan Swamy's case.

The Ministry of External Affairs has said the concerned authorities act against violations of law and do not restrain the legitimate exercise of rights.

It said India remains committed to the promotion and protection of the human rights of all its citizens and that the country's democratic polity is complemented by an independent judiciary and a range of national and state-level human rights commissions.

"Swamy was arrested and detained by the National Investigation Agency following due process under the law. Because of the specific nature of charges against him, his bail applications were rejected by the courts. Authorities in India act against violations of law and not against legitimate exercise of rights. All such actions are strictly in accordance with the law," the MEA said in a statement in New Delhi soon after Swamy's death.

It said Stan Swamy was receiving all possible medical attention at a private hospital where he was admitted since May 28. His health and medical treatment were being closely monitored by the courts. He passed away on July 5 following medical complications.

Ms Lawlor claimed Stan Swamy was jailed last October on "fabricated terrorism charges" and had been "subjected to harassment and repeated interrogations".

"I was devastated to hear that Father Stan, a Jesuit priest who had dedicated much of his life to defending the rights of indigenous peoples and the Adivasi minority, died in custody on July 5, despite many requests for his release as his health deteriorated in prison," she said.

She added that in early November 2020, UN experts joined her in raising his case with the Indian authorities, reminding them of their international human rights obligations. I now ask again why he wasn't released, and why he had to die in custody? she said.

Ms Lawlor added that Stan Swamy had been working for decades to protect the rights of Adivasi minority indigenous peoples and the Dalit minority, in particular violations involving forced displacement and illegal land acquisitions.

We know that defenders working on environmental, land or indigenous people's rights are among the most vulnerable to being targeted, claimed Ms Lawlor.

Ms Lawlor of Ireland is the Special Rapporteur on the situation of human rights defenders. She is currently an Adjunct Professor of Business and Human Rights in Trinity College Dublin. She was previously Director of the Irish Office of Amnesty International from 1988 to 2000.

Special Rapporteurs are part of what is known as the Special Procedures of the Human Rights Council. Special Procedures, the largest body of independent experts in the UN Human Rights system, is the general name of the Council's independent fact-finding and monitoring mechanisms that address either specific country situations or thematic issues in all parts of the world.