Karnveer Singh, 25, joined the Army in 2017 when his father Ravi Kumar Singh retired as Subedar Major from the Military. 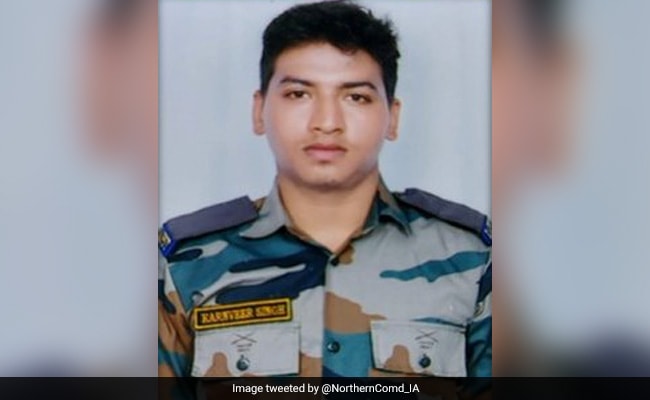 Karnveer Singh, 25 lost his life in a gun battle at Shopian on Wednesday.

The mortal remains of Karnveer Singh, a soldier with the Indian Army who was killed in an encounter with terrorists in Jammu and Kashmir's Shopian, were consigned to flames at his native village in Madhya Pradesh''s Satna district with full military honours on Friday.

Chief Minister Shivraj Singh Chouhan reached Deomau Daldal village to pay his respects and announced an honorarium of Rs 1 crore to the soldier's family and a government job to his brother Shakti Singh.

He further said that Karnveer Singh's statue will be installed in the village and an institution will be named after him in his memory.

Karnveer Singh (25) lost his life, while two other soldiers sustained injuries in a gun battle at Dragad in Shopian on Wednesday, in which two terrorists were killed.

According to Additional District Magistrate (ADM) Rajesh Shahi, Karnveer Singh, who was with 21 Rajput Battalion, hailed from a family of soldiers. He joined the Army in 2017 when his father Ravi Kumar Singh retired as Subedar Major from the Military.