In photos shared on social media, Anand Giri is seen river rafting, touring in France and standing in front of a bright orange Lamborghini at a race track 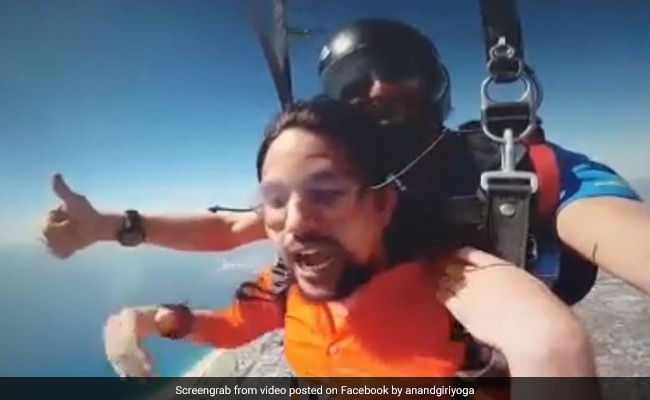 The arrested disciple of a top seer who died by suicide in Uttar Pradesh maintains an active presence on social media, where images of a flamboyant lifestyle appear among the visuals on religious matters and events.

Seer Narendra Giri, who headed the Akhil Bharatiya Akhada Parishad - one of the largest religious bodies of saints in the country - in his suicide note alleged he was under pressure over what he called a "morphed image with a woman", and named his disciple Anand Giri and two others as the conspirators.

Anand Giri has on his Facebook profile posted several photos of a globetrotting lifestyle. In one of the videos, he is seen jumping out of a plane strapped to a skydiving instructor. He gives a thumbs-up sign before opening the parachute in the skies over Wollongong in Australia.

In more photos shared on social media, he is seen river rafting, touring in France and standing in front of a bright orange Lamborghini at a race track. In yet more photos Anand Giri is seen standing from the sunroof of a BMW.

Twice in the suicide note, seer Narendra Giri said Anand Giri was going to attempt circulating a "morphed image" of him with a woman and making it viral, which would "bring him shame".

Soon after the seer was found dead, Anand Giri had alleged a conspiracy "by people who used to extort money from Narendra Giri".

"I have spent my entire life over there and never took any money. Everything was good between me and Guru Ji. Hence I request the government to investigate the matter thoroughly," Anand Giri had said.

He was allegedly expelled by the seer over allegations of fraud and financial mismanagement. There was an apparent patch-up, with a video showing Anand Giri seeking forgiveness at the feet of his mentor.

The police have seized the mobile phones of the three accused, including Anand Giri. According to officers, one of the accused, Sandeep Tiwari, had a phone worth over Rs 1 lakh despite working at a temple for Rs 9,000 a month. Anand Giri also used an iPhone, say the police.