Sidhu Moose Wala was shot dead by some unidentified assailants in Punjab's Mansa district last week, a day after the state government curtailed his security cover. 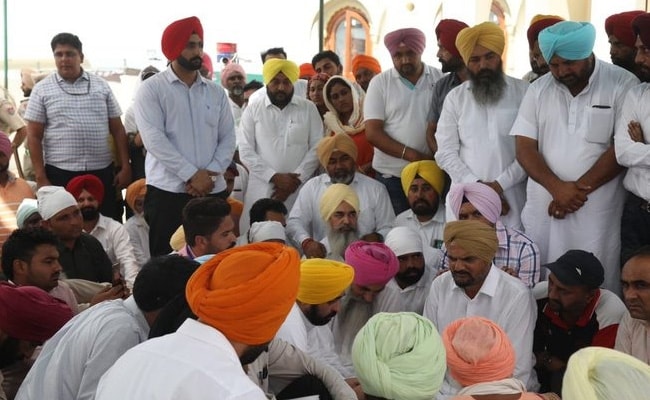 On his way, the Chief Minister had to face slogan-shouting protesters who tried to stop him from entering the Moosa village in the Mansa district.

Mr Mann reached Moose Wala's house around 10 am and spent about an hour with the singer-politician's family amid heavy police security.

Moose Wala, 28, was shot dead by some unidentified assailants in Mansa on May 29, a day after the state government pared down his security cover. His cousin and a friend, who were travelling in a jeep with him, were also injured in the attack.

The Aam Aadmi Party (AAP) government in the state has been sharply criticised for cutting back the singer's security, along with that of over 400 other VIPs, in a move that the opposition said was aimed at scoring political points. The AAP had also publicised the move on social media.

Moose Wala's family have also lashed out at the government. "How did it matter with the (deployment of) four persons with our son? Will your coffers be filled now? Fill your coffers," said his mother Charan Kaur.

Some leaders of the AAP have questioned why Moose Wala had travelled in a vehicle that was not bulletproof and not taken the two guards that were still assigned to him.

Punjab ministers Harpal Cheema and Kuldeep Singh Dhaliwal were the first AAP leaders to visit the family, meeting Moose Wala's father on Thursday, a day after the singer's cremation.

The Punjab and Haryana High Court was on Thursday informed that the security cover of 424 VIPs which was scaled down temporarily will be restored from June 7.